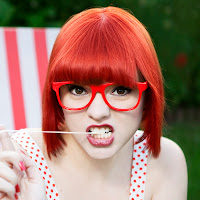 Today Scattershot Writing opens it's doors to yet another short story writer; Kate Monroe is a red-headed author and editor who lives near the sea in a quiet corner of southern England. She has fatal weaknesses for chocolate, horror, sex and old movies, and there are very few things that she wouldn't do for a large glass of red wine (her words, not mine...)

Her short story 'Lullaby' can be found in the Satan's Toybox: Demonic Dolls anthology (Amazon UK | US) which has a cover I find a bit unnerving to be honest... and her newest novella, Kiss Of An Angel, was released on Halloween (Amazon UK | US). 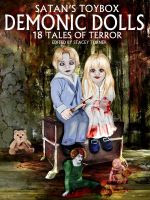 Take it away Kate...

The short story genre is one that is much-maligned. Often, an aspiring writer will be told that crafting a short story is best left to children and those on – whisper it! – ‘creative writing’ courses. If you have any genuine aspirations to be taken seriously as an author, then it is the full length, behemoth-like novels that you must devote your attention to and attempt to write.

But wait! A full-length novel?! That’s, like, eighty thousand words minimum, isn’t it?! Daunted by the size of the task before them, many would-be writers lay down their pens before even starting – and of those who do set out to make a valiant attempt at their first novel, I’d wager that nine out of ten of them give up before even reaching the halfway mark, leaving their dreams and hard work abandoned in a dusty corner of their hard drive, never to see the light of day.

So my advice is – don’t do it. I started six or seven novels before finally learning how to finish one and see it through; and I learned how to do so by writing short stories. You get your plot down on the page, with the traditional beginning, middle and end, and then the rest of the tale comes alive around it.

When you see how easily a ten or fifteen thousand word story flies forth from your pen (or your fingers, for those new-fangled unromantics who prefer to type straight away), then suddenly, developing that novel that before seemed so intimidating before is now less so. You know, now, that you can achieve a full story, and it’s only one step further to be able to create a novel of an acceptable length – and from there, the sky’s the limit!

Even leaving aside the lessons that can be taught when writing short stories, they are a joy and a success on their own merits. There is a real skill to condensing a story down into just a few thousand words and still managing to draw in your reader. EVERY word counts.

With no word limits to constrain you, with enough effort anyone can draw a florid and vivid description that translates the scene from inside their head onto paper to share - but to do so with just a few carefully chosen and atmospheric words? Far, far more difficult, and that is something that is often overlooked. To pack a punch so powerful that it stays with a reader who has only given twenty minutes or so of their time to reading your story – that’s a skill that demands and deserves respect.

You still need more convincing? Frankly, I’m astounded that the points I’ve raised thus far haven’t already got you dashing for either your pen or the nearest short story anthology, but hey, I like you. I’ll oblige.

The Pit and the Pendulum.

Of course you have – Edgar Allan Poe was a true master of words, and an utter inspiration. How anyone can decry the short story genre when it is populated by authors like Poe, HP Lovecraft, Mary Shelley and Bram Stoker, amongst many others, is beyond me.

A tale simply doesn’t have to be on the Tolkien and Rowling scale of epic grandeur to be brilliant in its own right; though it’s worth pointing out that even in the universe he created, Tolkien wrote many freestanding and interconnected short stories that, in their own way, were just as beautiful as the main tales that everyone knows.

To finish on a more personal note, I’ve written nearly half a million words this year (God’s honest truth, I just went through my files and totted them all up). Of all of them, though, my favourite is a little ditty just three thousand words long by the name of ‘Lullaby’. Writing ‘Lullaby’ frightened me more than anything else I’ve created, even within the confines of the relatively small word count; without wanting to sound narcissistic, it was this tale that showed me the power that just a handful of words can contain, and it was an honour to have it accepted for the first ‘Satan’s Toybox’ anthology by Angelic Knight Press.

I cannot urge you strongly enough; give a short story a whirl! Turn your hand to writing one yourself, or simply dive headfirst into the varied and wonderful short stories that have been crafted over the past few hundred years. Give up an hour of your time, ignore the stereotypes and open yourself up to the unparalleled joys they have to offer – I promise that you won’t regret it.
Posted by James Everington at 15:32

Email ThisBlogThis!Share to TwitterShare to FacebookShare to Pinterest
Labels: guest blog, in defence of short stories

I've actually gone the opposite route. My first story was a novella, then I went short story then I tried flash fiction. I'm back to novellas now =s

It's so true what you say about the psychological milestone of actually completing a story. It's a big deal at first but does slowly become easier.

Too right, Kate. I've found that short stories really are good practice and great fun as well. History has shown us that from humble beginnings comes greatness.