Recommendation: Case Of The Bedevilled Poet by Simon Clark 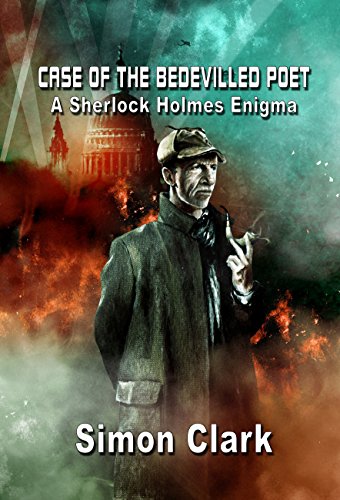 Case Of The Bedevilled Poet is the first in a new line of horror novellas from NewCon Press. It tells the story of Jack Cofton, a poet in London during the Blitz who, in a compelling opening scene, narrowly escapes death from a Nazi bomb.

But after this escape, Crofton's life becomes decidedly strange: an off-duty soldier insults and attacks him, and complete strangers all start repeating the same words to him: "And suffer you shall before you die." London suddenly seems filled with a sense of threat and violence which, while ambiguous, is directed towards Crofton. Seeking shelter in a pub, he encounters two old men who, preposterously, claim to be the real Sherlock Holmes and Dr. Watson. Crofton doesn't believe them of course, but he's in no position to turn down their aid...

As the above makes clear, there's a lot of plates set spinning in this story, and if the author was less talented all we'd have would be a load of smashed crockery. Fortunately, Simon Clark is too accomplished for that to happen, in part because the setting of London under siege by the Luftwaffe is so convincingly realised, both in terms of the concrete details and the depiction of the British public under fire. The characters of 'Holmes' and 'Watson' are also well done; a potentially absurd scenario actually becomes the source of pathos as the story progresses.

On one level, Case Of The Bedevilled Poet is a fast-paced, plot-driven tale, racing along with the same narrative verve as the Sherlock Holmes stories themselves. But at the same time there's weighty thematic concerns raised, in particular the idea that the 'death drive' (based on Freud's theories of a universal urge towards self-destruction) is behind both the violence directed towards Crofton and the world-wide conflagration of WW2 as a whole.

Overall, Case Of The Bedevilled Poet is an exhilerating read, and a fine start this range of NewCon Press novellas. (UK | US)
Posted by James Everington at 09:16