Other Indie Authors Are Available #6

Well, January has been a good month - a record number of ebooks books sold (a record for me, that is, not one in the Norris McWhirter sense), by far exceeding my previous monthly best. Plus a couple of new stories accepted, which I hope to be able to tell you about soon.

For now, though, you'll have to make do with this interview with me over at the Penny Dreadnought site. I know, another indie author interview. This one was conducted by a man without any flesh on this face though, so it has that going for it.

I've read a lot of good books too recently, including these ones by fellow indie-authors. Find one you like the sound of, download, and tuck in: 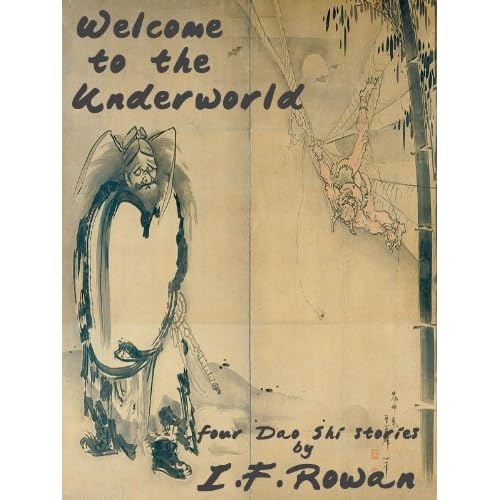 Welcome To The Underworld - I.F. Rowan

Well this was a pleasure to read - four interconnected short stories/novellas about Dao Shi, a conman, fraudulent exorcist, and reluctant hero. The setting is an unamed imperial city, with the war in the mountains a constant background. These four stories do a great job in building up the detail of the world, and how Dao Shi's personal story might connect to its wider politics and machinations. There are moments of humour here, excitement (the descriptions of the various demons are particularly good), and moments of genuine sadness too. Throughout it all the author does a great job in writing from Dao Shi's point of view, and his character is what drives these stories - somewhat vain, lover of food, but always insightful and humorous.

The author says in his afterword that if enough readers enjoy these stories there may be more - here's hoping for a Volume 2.

I review this from a position of complete ignorance, both of the original Latin poetry of Catullus or of any traditional translation of his works. So this was completely new to me & I enjoyed it a lot. I suspect a lot of of reviews of Catullus will use the word "bawdy" but it certainly fits - the tone is often conversational, lewd, or derogatory. Certainly a mile away from the lyricism that seems to be modern day poetry's default mode (which takes a bit of attuning to).

It's certainly intrigued me to find out more about Catullus, and the Latin poets in general, which I assume was the translator's intention. And I do love the fact that self-publishing has opened the door for projects like this, an obvious labour of love which wouldn't have seen the light of day in the pre-ebook age one feels.

Ill At Ease contains three stories by three different authors; all are dark (huzzah!) and focus on the psychology of the protagonists; none end happily. (A collective of dark authors? What a fantastic idea...!)

Stephen Bacon - 'Waiting For Josh'. A strong opener, this is a well-written story about a man returning to his childhood home town to see his ex-best friend, who is dying. Old secrets are revealed. Some really strong imagery and scenes; my only complaint was it was a tad predictable in places.

Mark West - 'Come See My House In The Pretty Town'. For me, the highlight of this collection - another old friends reunited story, but with a more sinister tone. With its small isolated English village setting, this is almost like The League Of Gentlemen played straight instead of for laughs. If you are afraid of clowns this will do nothing to help...

Neil Williams - 'Closer Than You Think'. A ghost story, or the tale of a man having a nervous breakdown accompanied by strange visions? You decide. Another good story, I particularly liked the way the horror seemed to take place in such mundane settings - supermarket car parks and rubbish tips.

There's also some interesting notes from each author, explaining the inspiration behind each story. Overall a strong collection, and one that will definitely lead me to explore further work from all three writers involved. I've already bought another Mark West book.
Posted by James Everington at 18:00