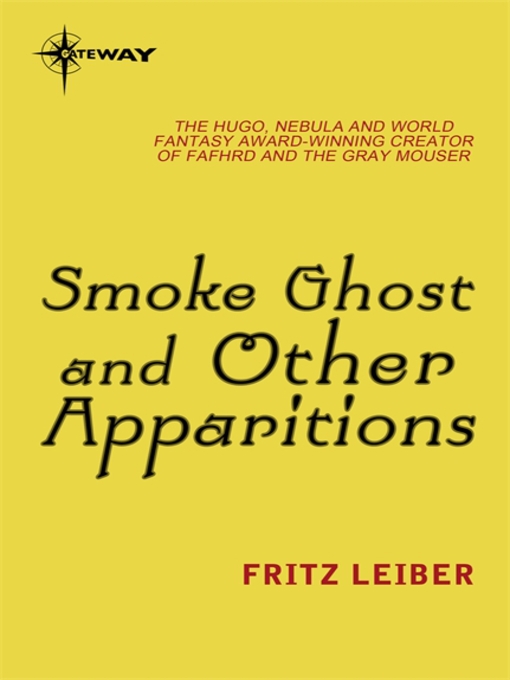 And he had said 'I don't mean that kind of ghost. I mean a ghost from the world today...'

I've read this story a number of times, most recently in the anthology The Weird. That was the first time, to my knowledge, that I've read it in a chronological sequence and been able to compare it to other stories of its time...

God how modern it seems.

I mean, just flicking through The Weird I can see this was written two years before The Crowd by Ray Bradbury; nine years before The Summer People by Shirley Jackson; thirty-four years before The Hospice by Robert Aickman. Fine stories all, and in some of their period detail you could perhaps date those stories after Leiber's. But in tone, in sensibility, I'd argue Smoke Ghost seems the more modern story.

It's self-consciously modern too. The quotation which I started this piece with comes from right at the start of the story, as if to let the unsuspecting Forties reader know that things had changed. It continues like this:

... a ghost from the world today, with the soot of factories on its face and the pounding of machinery in its soul. The kind that would... slip around at night through deserted office buildings like this one. A real ghost.'

You can almost see the light-bulb appearing above a young Ramsey Campbell's head when he read this paragraph thirty or so years later.

The setting of this story is predominately those deserted office buildings (because late at night), as well as crowded commuter trains, and doctor's offices, and creaking elevators.

And of course for a new kind of ghost story you need  a new kind of ghost. Properly speaking, the creature that haunts Catesby in the story isn't a ghost at all; it seems instead to be the malignant personification of modern living; a creature born of smog and pollution, of hate and war, machinery and alienation. It's face, Catesby speculates, is an amalgamation of:

...the hungry anxiety of the unemployed, the neurotic restless of a person without purpose, the jerky tension of the high-pressure metropolitan worker... the inhibited terror of the bomb victim...

And not just its face, we understand as we read this, but its emotions, such as they are, too. The smoke ghost is all our negative, alienated feelings come back to haunt us...

All this makes the story sound too knowing, too self-conscious to be truly scary, but somehow it pulls off the trick of being scary too. It's often said that it is the unknowable that is scary, both in life and in fiction, but like all truisms that doesn't always hold true. Catesby's terror is no less when he understands the nature of the smoke ghost, and neither is our uneasiness. Because like all the crap that we pump into the skies, it seems hard to imagine that all the stress and rage of modern life that we exude isn't floating around too, forming god knows what shapes in the sky.

Oh, and just to mention a nice review of The Other Room over at Trembles magazine can be found here, should you have the hankering to do so.

Posted by James Everington at 19:01

Read this when I was quite young, and it's really stayed with me. One of my all-time favourite weird stories.