Recommendation: The End Of Everything by Megan Abbott 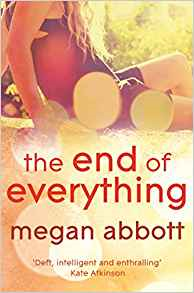 Megan Abbott's novel The End Of Everything is a book with a disapearence at its heart: that of 13 year old Evie Verver from her suburban American family home. It's narrated from the point of view of her best friend and next door neighbour, Lizzie. One of the first things you'll notice about this book is the impressive characterisation of Lizzie: at once appalled and fascinated by what might have happened to her friend. Lizzie is on the cusp of adulthood, and like many teenagers is both determined to appear grownup yet still subject to adolescent fantasy. Lizzie does not stay passive in the hunt for Evie, and the ramifcations of her intervention, for herself and others, form a key part of the story.

The narrative doesn't solely focus on the mystery of Evie's disapperence or the identity of her potential abducter, but also on the effects on those left behind. It's a book of secrets revealed - the secrets of the Ververs, of Lizzie, of the surburban world she lives in, and ultimately of vanished Evie herself, who Lizzie perhaps didn't know as well as she thought...

This is the first book by Abbott that I've read, but it's unlikely to be the last. It's wonderfully told, both in terms of the flowing, sinuous prose and the dexterious, clever storytelling. The characterisation is spot-on, and the plot's secrets are often revelled subtelly and obliquely. It's one of those stories whose voice seems to linger long after reading. Well worth reading.

The End Of Everything (UK | US)
Posted by James Everington at 21:33