Coffin Hop - Tales From Around The Camp Fire 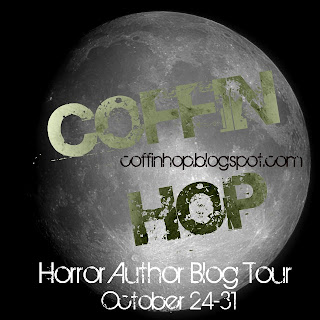 Halloween is almost upon us, and that can only mean one thing - annoying teenagers who aren't even in costumes wanting money and sweets from me all week.

This post is about horror stories, and is my contribution to the Coffin Hop blog tour - if you check out their site you'll see all the authors involved, and the best thing is they're all giving prizes away. As am I... read on to find out more.

But anyway, horror stories; ones told around a camp fire by a group of kids, each trying to outdo each other, each swearing their story is true. Stories called things like The White Lady; The Killer In The Backseat... and The Hook.

And despite all the literary sophistication that we horror authors try to bring to their tales, I like to think at heart we're all just kids around that camp fire, each trying to make people believe that no, really, this actually did happen.

But sometimes the stories we tell say more about ourselves than we realise:.

Some Stories For Escapists #4: The Hook

- “OK, I’ve got one, I’ve got one. There’s this boy and girl right, and they’re going somewhere in this car to get off with each other, like The Drop right? And…”

- “That’s where my brother goes with his girlfriend, when Mum wouldn’t let him in the home with her after…”
- “Your brother aint got no girlfriend, he just goes up The Drop with a Razzle!”
[Laughter]
- “Right, so they’re up there and snogging and it’s all dark and he’s got his hands on her tits and the radio’s on and in between songs this guy says, the news guy, there’s been a break out from the local mental home, which is right near where they are. Some psycho's escaped, and instead of a hand right, he’s got this hook, real sharp, which he uses to kill his victims, rippin’ up their guts. That’s what the radio says, and they’re still snogging each other, but she’s scared now, typical girl, thinking the killer might be around. ‘Let’s go home,’ she says, ‘Get off me, I want to go home.’ He doesn’t want to but she keeps sayin’ it, ‘Get off, I’m scared, let’s go, get off me!’ So he eventually lets her go and speeds off, real fast cos he’s pissed off right. And when they get back they find, in the driver door handle, this ripped off hook…”
[They all stare into the camp fire]
- “Your brother really get her pregnant?”
- “Yeah. My parents gonna kill him!"
- “Didn't he use a johnny?”
- “Dunno.”
- “He shoulda done it to her when she had her period. You can’t get pregnant then.”
- “No, aint it after she’s had it?”

Anyway, competition time. As regular readers will know, I've had some great guest bloggers on here to celebrate the art of the short story. And I think horror is one genre particularly well suited to short stories; I love reading  good anthology of horror stories by a host of different and varied writers.

So the competition is to make up your ultimate Horror Story Anthology. For every one that contains some stories I love, or that are new to me but that I rush out and buy, I'll give that person a free download of my horror novella The Shelter. And for the one I judge the absolute best, I'll also give a free download of my collection The Other Room. (All entrants are also very welcome to a copy of First Time Buyers  but as that's currently free anyway that's not much of a prize!)

The rules:
1. Leave a comment containing a list of the 5-10 stories that make up your anthology - you're favourite horror stories of all time
2. Any horror or horror-ish story welcome, as long as you didn't write it yourself
3. Anything from 100 to 15k words I'll consider a short story for the purposes of this competition

Good luck. And don't forget to check out the other authors on the Coffin Hop blog tour...!
Posted by James Everington at 20:02

Email ThisBlogThis!Share to TwitterShare to FacebookShare to Pinterest
Labels: guest blog, horror, in defence of short stories, short story, The Other Room

Hi James and Happy Halloween! You can borrow our teenagers during this week if you'd like :)

I'm going to be kind of difficult:
"The Hortlak" by Kelly Link
"The Creature from the Black Lagoon" by Jim Shepard
"The Colour Out of Space" by HP Lovecraft
"In the Hills, the Cities" by Clive Barker
A story about people in the arctic purposefully freezing and amputating their limbs that I am sure I read at chizine.com but which I can find no mention of. (See? Difficult.)
"Tesoro's Magic Bullet" by Aaron Polson
"Iphigenia in Orem", a one-act play by Neil LaBute (See?)
A lot of Ligotti stories. Sorry. (God I'm annoying)

I can't think of anything right off the bat, stopping by on the Coffin Hop tour though, to say Hello! Happy Halloween!
Maybe if I come up with something I'll come back.

And some other fine choices - 'The Yellow Wallpaper' and 'In the Hills, the Cities' being particular favourites.

Best anthology - I'd have to put these in. I know they're all popular, but they've influenced me the most-

“The Pit and the Pendulum” by Edgar Allen Poe
“The Rats in the Walls” by H.P. Lovecraft
“Other People” by Neil Gaiman
"Chattery Teeth" by Stephen King
“Smother” by Joyce Carol Oates

The Raven, by Poe
Metamorphosis, by Kafka (I know, it's not uber scary, but it scares the beejezus outta me!)
The Hortlak, Link
Tortured Souls, Barker
Pit & Pendulum, by Poe - again, because I *love* him.

Thanks Anne - I've always argued Kafka has had a lot of influence on the horror genre (Aickman for example) so his inclusion is fine by me!

Link is awesome. I tried to provide links to the free stories in my list, but they didn't take, probably because I used the lazy method of copying from Word.
here's a link to "The Horlak":
http://kellylink.net/magic-for-beginners/magic-for-beginners-sample-stories/the-hortlak

She gives a bunch of her fiction away free. Whole books:
http://smallbeerpress.com/creative-commons/

Hmm - that's tough. Off the top of my head the ones that stuck with me.

The new header image on your blog scares me.

* sure it has a child, locked in a room, and faces painted on the wall with glow in the dark paint, not Born Of.

Alan - thanks for the Link (ahahaha) I will check out the freebies.

Iain - the banner image is from a photograph took by Neil Schiller when he was sending me things he thought would work for the cover of The Other Room. It's an Alice In Wonderland chess set. I may still use it for a future cover, I really like it.

I can't think of 5 off the top of my head. Also most of the ones I can think of are either Stephen King or edgar Allen Poe, so are pretty obvious anyway. But it's great to 'meet' you!

Oh boy my brain is shot--think I'm just going to say hi on this one!! Happy hoppping :)
Penelope

My ideal anthology would include:

The Monkey's Paw by W. W. Jacobs
Jeffty is Five by Harlan Ellison
The Tell-Tale Heart by Edgar Allan Poe
The Lottery by Shirley Jackson
The Price by Neil Gaiman
The Fog Horn by Ray Bradbury

This was harder to come up with than I thought it would be! And I see some of my choices have already been mentioned, but still -- I'm gonna go with these:

You can check out my Coffin Hop giveaway at my site, if you like. Thanks! Happy Halloween!