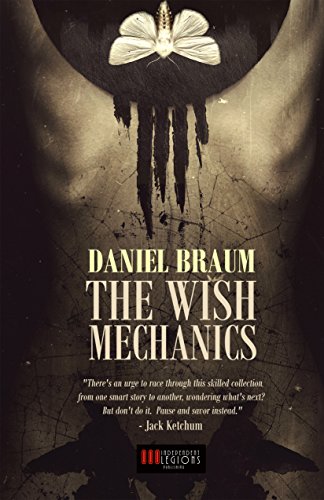 My first experience of Daniel Braum's work was his story 'Palankar' in Nightscript III (which I interviewed him about here) and it was such a good piece of strange horror fiction that I had to go out and read more.

So I bought The Wish Mechanics as it was his latest collection, although upon reading the introduction I found out that the stories within are generally contemporaneous with those in his other collection, The Night Marchers. The tales in that volume are apparently more rooted in horror tropes and aesthetics; the stories in The Wish Mechanics are a more varied and eclectic bunch.

It starts with the wonderfully titled 'How to Make Love and Not Turn to Stone', a frankly brilliant story about a couple who live above a beach on which real-life basilisks roam. It's a beautifully handled concept, powering a narrative concerned not so much with the supernatural creatures and their ability to petrify, but with relationships and what we might risk by getting involved with another person. With the various ways our hearts can be hardened. As is common with many of the best stories here, the supernatural element is at once 'real' within the world of the story and metaphorical, not so much a 'symbol' as a concrete representation of ideas the author wants to evoke.

'How to Make Love...' pairs nicely with the final story in The Wish Mechanics, 'This Is The Sound Of Your Dreams Dying'. This is another tale about relationships, both how they begin and how they end. The uncanny element starts as a backdrop for the characters' emotions and dilemmas, but moves centre-stage with some powerfully creepy scenes.

In between these two pieces there are plenty of other gems. 'An American Ghost In Zurich', as well as having (again) a brilliant title, is another immensely impressive story. It is based around a particle accelerator similar to the Large Hadron Collider, and the scientific concepts it plays with—alternative worlds, retro-causation, quantum entanglement—are used to give it feeling of strangeness, of almost Borgesian other-worldliness, that's as strong & powerful as that which traditional genre tropes can evoke. It gains bonus points from me for featuring alternative-dimension songs from a band I love, School of Seven Bells.

Elsewhere, 'Tea in the Sahara' is a more old-fashioned styled story about wishes and fate and three sisters; 'The Canopy Crawlers' a 'straight sci-fi' story full of invention (which shows Braum can sure as hell write action, too), and 'The Water Dragon' takes us back to strange fiction again. There's further sci-fi of a dystopian nature in the title story, and the end of the world (literal or otherwise) in another favourite of mine, 'The Truth About Planet X'. Plus there's plenty of other fine stories to savour, too.

So, overall The Wish Mechanics is a varied, eclectic, accomplished set of short stories, with a number of genuine classics within its pages. Looks like I'll be buying The Night Marchers too then.

The Wish Mechanics (UK | US)

Posted by James Everington at 20:14