Recommendation: My Life In Horror #1 by Kit Power 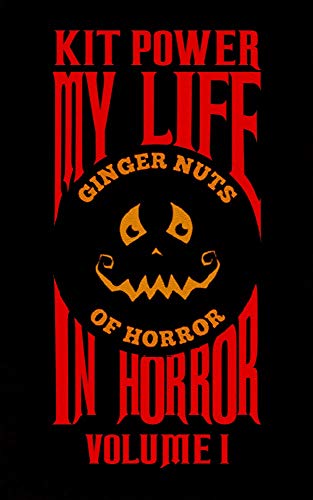 Kit Power's My Life In Horror #1 is a non-fiction collection of essays originally published on Gingernuts Of Horror. In each, Kit describes a formative encounter with the horror genre in his childhood or young adulthood: not just books and films, but also music, a role-playing game, and real-life events. Kit's definition of what counts as 'horror' is pretty flexible, which makes for some delightful surprises in what he's included—as well as Hellraiser we get Robocop, as well as The Wasp Factory we get Sleepers. I thought I'd already read most of the content, but it turns out there was quite a lot I'd missed, especially where they relate to music. As an aside, Kit is very good writing about music, making we want to listen to tunes I either doubt will be to my taste (The Wildhearts) or even already know I loathe (bloody Queen).

Kit and I are of a similar age, so I encountered a lot of the works he mentioned in my youth too (and I was struck by the notion, hinted at throughout the book, that the news we see as kids influences our view of horror as much as fiction; that footage of Hillsborough, Zeebrugge, the Challenger explosion, or the Ethiopian famines, form a bedrock of shared cultural experience and imagery similar to liking the same films) but I suspect nearly all fans of the genre will get a kick out of these pieces. And...

There's a great moment in B.S. Johnson's Alberto Angelo where he interrupts his own novel by saying "fuck all this lying" and proceeds to tell the supposedly real-version of events that inspired the fiction up until that point. And while I've not been lying above, I have been circling round the real reason I loved this book:

I haven't seen my writing friends in months, nor am I likely to for months more.

Like many I'm sure, my writing has taken a hit this year. My routine's all changed, I've lost some mojo. And part of it is that the conventions are cancelled, those semi-regular catch ups with fellow authors. I'm sure I'm not the only one who gets a burst of motivation & enthusiasm following Fantasycon or Edge-Lit, and while some of that is from the scheduled events, a lot is from being surrounded by so many amazing writers and fans and creatives, from talking to them during the day and well into the night.

Reading My Life In Horror feels as close to one of those conversations as I'm going to get this year. Indeed, the first chapter is about Stephen King's IT, and one of my favourite FCon memories is a late night conversation with Kit and Mark West when we talked about how much we loved IT for hours. And the great thing about this book is it's so personal, so much Kit's take of the horror genre, that it feels like a one-way conversation with him. My responses to the essays in the book weren't objective judgements, but me thinking what I would want to say back to him, if I could. (You're so wrong about Don't Look Now, Kit.)

In a very real way, it's fired me up like a convention would (I even read it Friday to Sunday, the same timescales as Fcon) and made me want to get back to my own writing, to my own life in horror. So it's pointless for me to pretend to describe this book like I did at the top of the review, to compose an objective sounding discussion of its many strengths and odd weaknesses.

My Life In Horror #1 was quite simply just what I needed right now, in 2020, and it might be just what you need too.

Posted by James Everington at 14:04