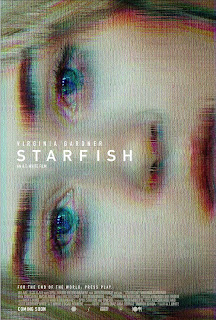 You know what used to be my dream? For everyone to just disappear.

So, it's been six years since I last posted a 'Strange Story' piece on here. But as soon as I had the idea to write about the artsy-'horror'(maybe) film Starfish, it seemed appropriate to resurrect the idea. After all, starfish can regrown lost limbs can't they?

I've never written about a film as a 'Strange Story' before (unless the one in House Of Leaves counts...), probably because I'm not very qualified to do so. So I'll not really mention here the technical aspects of direction or cinematography (although there are some striking visual images), the score (although the music both original and by bands like Sigur Ros is brilliantly used) or the acting (although Virginia Gardner's central performance, alone as she is for most of the scenes, is a key part of what makes this movie work). Okay, so I have mentioned all those things. But really I want to write about how all those elements work together to make this film feel so different: the production, the sound, the imagery, the performances, the plot...

The plot—I should be able to write something about the plot, as a writer. But even that is not easy to do. Starfish begins with the claim it is based on a "true story" and possibly this might seem plausible for the first twenty minutes or so of the film. The main character, Aubrey (and we'll soon know a lot about her, and very little) is at the funeral of her friend, Grace. Aubrey is not okay: isolated, withdrawn, dissociated from what is around her. She leaves the wake and breaks into Grace's apartment which hasn't been cleared out yet, and finds the first of seven mixtapes her friend has left for her, presses play, goes to sleep...

Aubrey wakes up alone in a frozen, depopulated world, with signs of a much larger disaster off-screen: we see smoke on the horizon but not what's burning, blood in the snow but not the bodies. There's an monster lurking in the abandoned town, and the voice of another survivor on a radio says the devastation has been caused by an alien radio single, which has some connection to the mix-tapes left by Grace. If Aubrey can find all the tapes and play them then...

But. Is this really what is happening? There's a dreamlike quality to Aubrey's predicament, an oddness to the world she's in (it reminded me of It Follows and that film's deliberate ambiguity about when the film is set). More than that, there's an aptness to her situation, her literal isolation in an empty world echoing her emotion isolation at the start of the film. When she's not fleeing from the monstrous creature in the streets, Aubrey's perceptions seem odd, surreal, and the stylistic choices the film makes become bolder, and at the same time more disjointed... very much, in fact, like a mixtape from a friend lurching from genre to genre.

We start to realise that this is as much a film about Aubrey's past, and her relationship with Grace, as it is a film about alien apocalypse. Her quest to find the mixtapes might save the world, but she's also trying to get closer to the memory of Grace and atone for some prior wrongdoing... Her flashbacks show us snippets of a fractured narrative, her guilty memories fixated on certain key scenes she replays over and over, rather than allowing us to know the full story. 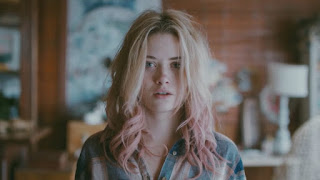 Based On A True Story—maybe that's more true than it seems, not a postmodern fake-out at all. Everything that happens, everything we see—whether 'real' or hallucinatory in the context of the film—is an attempt to represent something "true" underneath. But the beauty of Starfish is that it doesn't attempt to fully undermine its genre-based alien invasion narrative; there's no Matrix-style different levels of reality, one more real than the others. Both aspects of the narrative work together, it's a picture both of a duck looking left and a rabbit looking right: unfocused your eyes and you can see both. It's something more than the sum of its parts, even if you're not sure what that 'something' is. It's not quite the same as anything else I've ever seen, and I'm still thinking about it a days later. Not for everyone I imagine, but if you like the kind of fiction I've mentioned on this blog before, it may be for you. I loved it.

Oh, and Grace has killer tase in music.

Posted by James Everington at 21:56