Recommendation: You Will Grow Into Them by Malcolm Devlin 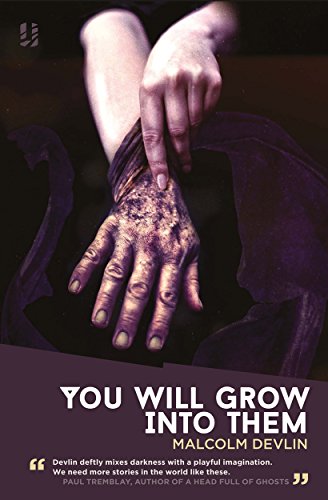 A few brief, inadequate words of recommendation for Malcolm Devlin's debut collection, You Will Grow Into Them:

Anyone who's read any of Devlin's work before will not be surprised that these stories are all expertly constructed, brilliantly told. But reading them together really brings home the range of his talents, both in terms of genre-tropes and more importantly emotional depth and characterisation.

It begins with 'Passion Play', a story about a teenage girl acting out a police reconstruction of the disappearance of her best friend. A story focussed on doubling, then, as both external events and the two teenage girls reflect and distort each other. It's a theme continued, in a very different manner, in the second story 'Two Brothers'. Here William waits for his older brother to return from his first term at boarding school; when he does William finds him changed, more assured, colder. A parable about growing up, and what we might lose in the process (at least when seen from childhood's perspective) this is a brilliant piece of work.

Two stories in, then, and I'm already smitten.

By the time I finish the fifth story, 'Dogsbody', I'm already thinking this collection will be topping some end of year best of lists. 'Dogsbody' is quite simply the most original take on the werewolf theme I've read in years, so much so that I don't want to say too much here. Just read it. Suffice to say it tackles social stereotyping, tabloid hysteria, the buried emotions of modern masculinity, and so much more. Superb.

'The Last Meal He Ate Before She Killed Him', preposterously, might be even better. A realistic tale that would make a great play, being set in a single location and on a single night. It takes place in a house where "the widow" poisoned a general, in an unnamed country ruled by a despot. Games of influence and power and patronage play among a group of dinners being served the very same meal the murdered general ate the night he died...

And then there's 'The End Of Hope Street'. The finest short story in an impossibly good collection. An extended riff on Cortazar's 'House Taken Over', it tells of the houses on the titular street becoming "uninhabitable" - normal, suburban middle-class homes suddenly change, in an unspecified way, so that people can no longer live there. Literally: they die if they cross the threshold again. Each incident is accepted matter of factly by the residents of Hope Street, taking in their now homeless neighbours, even though their home could be next...

It's a masterpiece. I'm going to read it again after writing these rushed and no doubt clumsy words.

One of the short story collections of the year so far.