Guest Blog: Alex Davis 'The Hardest Movie I Ever Watched'

Today on the blog I'm very pleased to welcome Alex Davis, with a guest post about his new project, Film Gutter. So, without further ado...

Take it away, Alex: 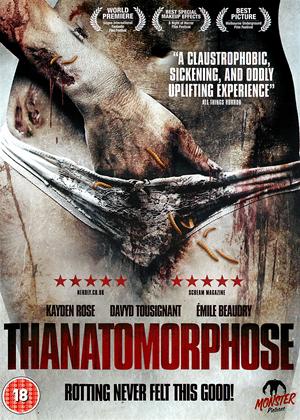 GUEST BLOG: THE HARDEST MOVIE I EVER WATCHED
Over the last year, I’ve had a wonderful time working on reviews and interviews over at Ginger Nuts of Horror, all focused on the world of extreme horror. It’s a fantastic scene of people, who have been hugely helpful and welcoming, and I’ve legitimately stumbled across some of the best films I’ve ever watched. But there have also been moments where I have thought ‘why on Earth did I do that to myself?’ I’ve never shied away from a challenge, and consider myself someone who is quite hard to shock. I expect there are a few films that I’ve seen that would have defeated a lot of viewers along the way. But the one that sticks out by some way as the hardest to watch, and that is Thanatomorphose.
The date was 19th April 2015, and with the house to myself I decided to settle down for a movie for Film Gutter. This year I’m trying to keep a bit more ahead of the curve, but for a long time after I started it was watch it, review it, send it and live it went. So I got myself comfortable for Thanatomorphose, one of those films I had seen on a number of ‘most disturbing’ lists. And it turned out to be anything but a comfortable experience.
Now, what disturbs people is distinctly individual , but for me this one was kind of the perfect storm. The story follows a young lady in a fairly uneasy love triangle between her ‘alpha male’ boyfriend and a rather gentler and shier friend. The movie openings with a mind-wrenching cacophony of colour and sound, a strange shooting style repeated later on to even greater effect. When we get to the real ‘meat’ of the story, what begins as a fairly ordinary seemingly illness soon becomes a living hell for our lead. Her body begins to give in on her, rotting away to nothing. The shooting and visuals are so graphic and unflinching that it left me utterly speechless throughout. But when you add into that the fact that her decay also sees her mind descending and her animal lusts taking over, you have a combination that made me feel perturbed in a way no movie ever has before or since. Oh yeah, and I ordered myself a kebab before starting this one. A kebab. What the hell was I thinking? When it arrived there was no way I could eat it... Kayden Rose does a fine job in the lead, growing increasingly fascinated with her condition and also embracing some utterly horrible scenes. The final scene is punctuated with an absolutely awful scream as her body finally dissolves to nothing, and I was left with my hands over my ears asking myself ‘Is it over? Is it over?’ Never have I wanted to turn off a film more.
And you might ask yourself, why the hell didn’t I? A fine question. First up, in taking up the quest of Film Gutter, I made a sort of silent vow to myself to NEVER turn off a film, no matter how upset, nervous or physically sick it was making me. And secondly, it’s the kind of morbid curiosity that was in evidence throughout Thanatomorphose. Why do drivers slow down to look at car crashes? Why do people gather round when people are attacked or mugged on the street? We want to know. We kind of need to know, as humans – we can’t help ourselves. And for this very reason I had to get to the end of this film. Not because I ever thought there would or could be a happy ending – in fact, so much extreme horror has a bleak finale! But I just had to witness it.
Now, a lot of people don’t share that urge with me. Which is kind of what Film Gutter is there for – by no means is it simply a mechanism for masochistic self-torture. Film Gutter is a safe window to look in to and find out what you wanted to know without looking at it yourself – we’re offering the newspaper coverage the day after that car crash. You can get the facts, but you don’t need to witness the gore, the violence and the deviancy yourself. Just how shocking is A Serbian Film? Do they seriously do it with a zombie in Nekromantik? Just how twisted are the Guinea Pig movies? And are there seriously films called Human Pork Chop and Bad Butt?
If you love extreme horror, hopefully you’ll find some useful guidance as to what’s among the finest on the scene. But if not, this is a glimpse into some of the brilliance and madness that is out there – and remember it’s a fine line between those two...


Film Gutter Volume 1 is out now on ebook, with 50 reviews, interviews and more exclusive content from the world of extreme horror. Read it if you dare, and watch them if you’re even more daring! More here.

Posted by James Everington at 11:35