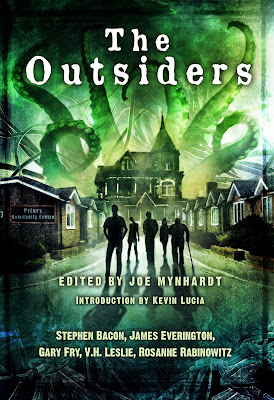 Very pleased to say The Outsiders, a shared world Lovecraftian anthology from Crystal Lake Publishing is out today. It features my story Impossible Colours as well as stories by Stephen Bacon, Gary Fry, V.H. Leslie and Rosanne Rabinowitz plus an introduction by Kevin Lucia. It's an absolute privilege to be published alongside such great authors and being in a book from the fantastic Crystal Lake Publishing is just the icing on the cake.

You can read the blurb below, as well as quotes from each author, including me, about their story.

Inside Priory awaits a lot more than meets the eye. The people might seem friendly, but only because their enigmatic leader Charles Erich accepts nothing less.

The cottages within this gated community seem simple enough, and even though what lurks beneath them is more ancient than mankind itself, can anything be more evil than the people worshipping it?

If you dare follow this UK invasion of five prime authors as they each tell their own story of the people living behind Priory's steel gates and high walls, you'll quickly find yourself an outsider, as well.

The Priory. A community of one mind and purpose. A place of order, commitment, peace, and service. A perfect world, building on mind shattering secrets from beyond the pale. Enter…if you dare.

“As I wrote the story, I drew on my experience of returning to places where I grew up as an outsider, the 'home town' that was never home – an experience that many people share.” – Rosanne Rabinowitz

“I wanted to take this idea of digging deeper quite literally and write about not only the mysterious and potentially dangerous things the earth conceals, but the often beautiful things it relinquishes.” – V.H. Leslie

“Joe's (the editor's) notion of a gated community filled with various reclusive go-getters fired my imagination, coming as it did during a spell of unprecedentedly terrible activity during a perpetual interest of mine, the darker reaches of the UK economy, all its social strata and clench-palmed denizens. The secrecy and exclusivity of such an enclosed venue struck me as an able symbol for the nefarious activities of many folk involved in the national conspiracy of theft and concealment which characterised the credit crunch.” – Gary Fry

“Lovecraft’s racism (at least as it manifests itself in his fiction) has always seemed to me to be psychological as much as political or overtly fascist. The word ‘xenophobia’ (a rejected title for ‘Impossible Colours’) appropriately describes his unease towards all outsiders, not just those of different coloured skin. Indeed some of his best fiction is driven precisely by the horror of being overrun, of being subsumed by ‘the others.’” – James Everington
Posted by James Everington at 19:59