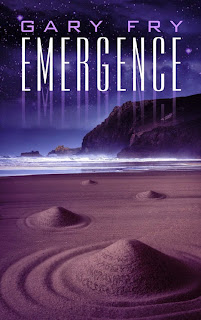 A quick post about Gary Fry's novella Emergence which I suspect readers of this blog will like as much as me. Emergence features two central characters, widower Jack and his grandson Paul, come to stay with him at the seaside. Jack's house is isolated from the nearby town, and the story is solely focused on the two of them and the relationship between them, which is deftly and subtly drawn. The central dynamic between Jack and Paul is nicely summed up in the opening scene, where Jack is reading a story to Paul... and trying to ignore doubts about his own failing faculties as he does so.

The theme of communication, and of its breakdown, is very much at the heart of the novella. The supernatural element comes when Paul and Jack encounter strange alien geometries sculpted from the sand on the beach. The shapes are washed away by the tide; if they are an attempt to communicate they are a failure. The things Paul and Jack find on the beach get progressively more sinister and disturbing, whilst still never losing that alien sense of otherness. Neither the characters or us fully comprehend just what they are dealing with, and whether the beings creating the shapes are actually malicious or just totally resistant to human comprehension. The threat posed by them is real either way, and the sense of dread mounts expertly as the novella progresses.

It's yet another example of Fry's clever retooling of Lovecraftian and Blackwoodian (yes that is a word) tropes for the modern world. This isn't just because Emergence is set in contemporary Yorkshire, but because the themes Fry explores in his work feel contemporary too: dementia, cross-generational relationships, even the internet and how it both connects and isolates.

Emergence is a quick and fast-paced work of horror, but also has enough intellectual meat to keep you mulling it over in your head long after you've finished it. Recommended.
Posted by James Everington at 10:43