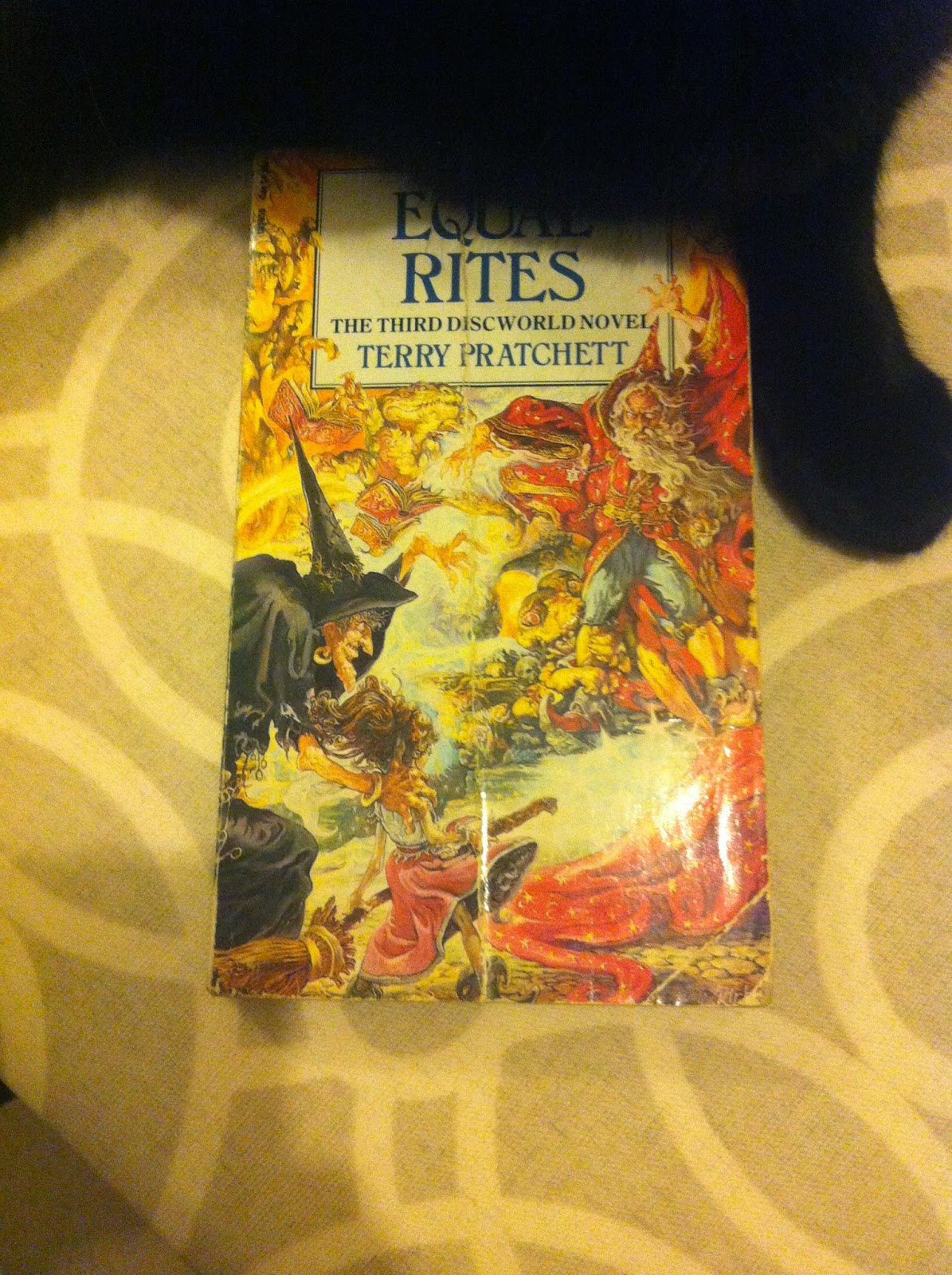 "This is a story about magic and where it goes and perhaps more importantly where it comes from and why..."

So begins the first Terry Pratchett book I ever read, Equal Rites. I was fourteen and I bought it for £2.99 from WH Smiths in the Victoria Centre in Nottingham. I've still got the same copy, battered and with a huge crease down the front cover. I tried to take a photo tonight on hearing the truly sad news that Pratchett had passed away; my cat kept trying to get in the picture, but when I remembered how much Terry Pratchett liked cats that seemed appropriate.

I've written on this blog before about how many authors I discovered by perusing my Dad's bookshelves, but Terry Pratchett was the first adult author I can remember discovering myself. (And my Dad discovered Pratchett through me, and loves his books as much as I do. Indeed, all these years later the latest birthday present I've got for is Pratchett related. Sorry it's late!)

Equal Rites, the third Discworld novel, is possibly the best one to start with. It's not quite at that level of effortless brilliance Pratchett sustained for so many years, but it's almost there. Whilst the first two Discworld novels used his comic universe to satirise the tropes and cliches of fantasy fiction, Equal Rites seems to be where Pratchett realised how wonderfully he could use the Discworld to mock and illuminate our own world. It's about a young girl who has accidentally been gifted the power of wizardry; but on the Discworld only men can become wizards. Apparently. For some reason. An obvious common-sense reason, but one that no one can quite explain to the girl in question... It's a wonderfully comic and humane story about stereotyping and sexism, eloquent and sensible without being dogmatic. Pratchett's exceptional gifts of characterisation and dialogue are already fully on display, and it's the first book to feature one of his most enduring characters, the witch Granny Weatherwax. And it features Death too, of course. ("I HAVEN'T GOT ALL DAY, Death said reproachfully.")

After Equal Rites Pratchett went on to write a seemingly endless stream of brilliant books about magic and power and dragons and war and Shakespeare and trolls and opera and undiscovered continents and identity and orang-utans and religion and music and cats and jingoism and vampires and growing up and newspapers and growing old and football and story-telling and Death and death. And I loved them all.

Given how many books he wrote and how good they all were (and how utterly re-readable they all are) Terry Pratchett is undoubtably the author who has given me the most amount of pure pleasure in my reading life. For me, he's up there with the greats, possibly the finest comic novelist in English (Douglas Adams might equal him in quality but only wrote a fraction of Pratchett's output). One of the finest novelists full-stop.

Of course, some people are sniffy about fantasy writers or comic writers and especially comic fantasy writers, but those people are idiots. Terry Pratchett was a monumentally talented writer and by all accounts a thoroughly decent human being. He wrote over fifty books and even that still doesn't feel enough on hearing today's news. But it's what we have and it's a wonderful legacy. It's where the magic came from and still will, for generations.

"It is often said that before you die your life passes before your eyes. It is in fact true. It's called living."

Posted by James Everington at 21:40

I just nominated you for the Liebster Award. Go here to find out what to do: http://faroutfantastic.blogspot.com/2015/03/the-liebster-blog-awards.html

Great job with your posts!