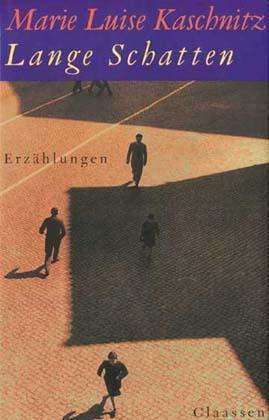 Today's post comes courtesy of Tilman Breitkreuz, who emailed me after reading the Strange Stories piece I wrote about Joanna Russ's The Little Dirty Girl, to ask me if I'd ever heard of a German author called Marie Luise Kaschnitz; I had to confess I hadn't, and after a few emails back and forth Tilam agreed to write me a piece about her work for this blog. Her stories sound fascinating (I hope not just to me but other readers of this blog) and although difficult to find in English translation there are copies out there.

Thanks to the author for this wonderful piece and for drawing my attention to a new author of the strange..


The Strange Stories of Marie Luise Kaschnitz
An elderly couple imposes a blackout on their home because they are afraid that their adopted son and his street gang might come and kill them (Thaw). Realizing that she has literally lost all feelings, a woman sets herself on fire (Die Fuesse im Feuer). A young man takes part in a superstitious ritual and evokes a malevolent homunculus (Der Tunsch). On the face of it, it is hard to imagine why Marie Luise Kaschnitz once stated that she wanted to express "commiseration with people…"

Born into a family of high nobility and a military background in 1901, Marie Luise Kaschnitz did not rise to fame until the 1950s. While these years are often glorified on account of an economic boom and a regain of confidence, Kaschnitz shows them in a different light: despite their relative security and comfort, her characters seem to be wedged between a guilty and traumatic past and an impending doom in the future (sometimes identified as the nuclear threat).

Like Flannery O´Connor, who wrote her classic stories in the same era, Kaschnitz often implies supernatural elements in order to confront her protagonists with crucial questions and unwelcome answers. But it is not these supernatural features, usually adopted from myths or folk lore, that make her stories worth reading. Using a sober style of writing comparable to Dino Buzzati (with whom she shared the experience of having to live in a totalitarian state) and shy of graphic content, Kaschnitz's central point is not about conjuring a supernatural apparition (maybe that is why her only classic ghost story - bluntly entitled Ghosts - turns out somewhat flat). Wraiths (like in Polar Bears) and demons only serve to reveal a state of general uneasiness, some sort of gloomy detente based on knowing that what has happened to others might as well happen to you. Remedies are scarce. In one of Marie Luise Kaschnitz's strongest pieces the ghost of a woman painter who starved herself to death lets us know that human existence is inevitably tragic and therefore happiness can only be found in tragedy (Zu irgendeiner Zeit). This approach - probably based on Schopenhauer's philosophy instead of rive-gauche-existentialism - resonated with a large audience. So did the accessibility of her prose and Marie Luise Kaschnitz became sort of a household name in Germany.

English-language collections of Marie Luise Kaschnitz´ stories usually feature her own favorite Das dicke Kind (The Fat Girl). The caterpillar-like stranger who invades the life of a single woman (note the similarity to Truman Capotes Miriam) is too ugly to be pitied and only provokes the narrators contempt and curiosity. When the two of them go ice-skating the fat girl becomes a menace first and finally she isn't a stranger any more. There is a striking resemblance to Joanna Russ's The Little Dirty Girl. The bottom line in both The Black Lake and Musical Chairs is that certain conditions require a human sacrifice. Kaschnitz's interest in Greek myths and rites of passage resounds in Home Alone when a young boy finds out that his parents have thrown away his shabby toys (one of them being a toy SA-man) because they think he has outgrown playing with them. He finally agrees - and ignites the gas stove trying to find out if he might talk to the flames like he once talked to his toys. Other non-supernatural stories of note are the aforementioned Thaw and Christine, a grim piece told from the perspective of a woman who once urged her husband not to interfere when a criminally insane man killed a little girl.

In Street Lamps we find the supernatural competing with the horrors of reality. A teenager who has always been eager to do heroic deeds without actually being noticed learns a strange trick that controls other peoples minds. When he challenges the most powerful mind controller of his times (whose name is not mentioned because it is obvious), he fails and later lives a bleak and unhappy life trying to make up for his mistake. In the end we find him a soldier, dying on the pavement somewhere in Russia. Realizing what has gone wrong he has finally found peace as well as freedom but both seem to equal death.

A swim in the Mediterranean sea takes a wrong turn in A Noon Hour In Mid-June while back home an uncanny stranger calls at the neighbour's door. Marie Luise Kaschnitz´s own fate somehow resembled this story. In the fall of 1974 she over exhausted herself swimming in the cold Mediterranean sea, caught pneumonia and died in Rome on the 10th of October 1974.

Some of her work might seem dated and some readers might wish for more action. But those who would like to explore the frailer parts of the human condition could do worse than look into what Marie Luise Kaschnitz has to offer.
Posted by James Everington at 18:23