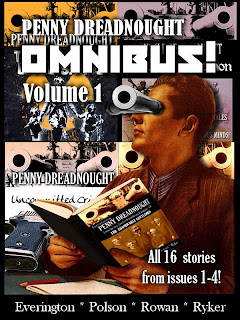 Very pleased to say that the Abominable Gentlemen's diabolical plan is coming to fruition, with the release of the first Penny Dreadnought Omnibus!

(For those who don't know, Penny Dreadnought is a series of themed weird fiction anthologies from myself, Alan Ryker, Iain Rowan, and Aaron Polson).

It contains all sixteen stories from the first four volumes of Penny Dreadnought as well as a bonus gallery of cover art. Side effects may vary from reader to reader, but are likely to include: trembling hands; creeping dread; visions of the end times; speaking in tongues; existential doubt, and an intolerance to sparkly vampires.