Almost exactly a year ago, I took my first bare-foot steps into the chilly waters of self-publishing, and released my collection The Other Room. Some of these stories had already been published in magazines, but most were new to the world. I honestly had no idea how the book would be received, either in terms of sales or reviews. 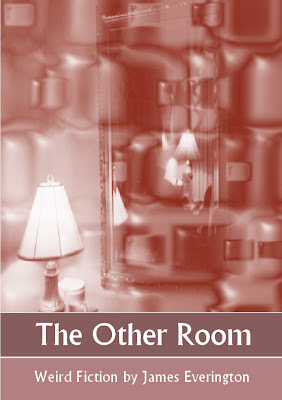 Fortunately, it's gone far, far better than I ever imagined. I mean, a book that cites Robert Aickman as an influence in its blurb is never going to be the next Twilight but by my own standards The Other Room has sold well, and the responses from readers from been both humbling and exciting. And at least one person let me know in an email that they bought it because of the Aickman reference.


And to celebrate, for the next week it is available for free from Smashwords, if you enter the following code at the checkout: QD54K. If you do pick up a copy, I'd love to know what you think of it.

And a year anniversary is an excellent time to start seriously thinking about what stories to include in a second collection, isn't it? You betcha.
Posted by James Everington at 20:58

Email ThisBlogThis!Share to TwitterShare to FacebookShare to Pinterest
Labels: big head, horror, The Other Room

This is very generous, James! I am looking forward to reading the collection. I usually write up a brief overview / review of the stuff I'm reading. I'll shoot you a link when I post about your book.

Thanks Elizabeth; hope you enjoy it...

Very nice to make it available. I will try to write a review on both Amazon and B&N. Thanks

If James will forgive me using his own blog to link to mine, you can read why I thought that The Other Room was a fantastic read.

It's not ready yet Iain, so there may be a little wait... I still need to pick story order, do author notes, get the odd proofreader on it, and then decide how I want to publish it..,