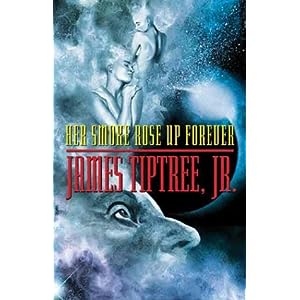 ... I knew it was real because the frogs stopped croaking and two blue jays gave alarm calls.

This week's strange story comes from the world of science fiction rather than horror; as anyone who has read my post The Horror Genre and Cardamom Ice Cream will know, I take a pretty relaxed view of genre boundaries... James Tiptree Jr. was the pseudonym of of Alice Bradley Sheldon, although confusingly this story was first published under the name Racoona Sheldon. It's not really relevant to this post, but the world of sci-fi seemed to get its knickers in a twist about whether James Tiptree Jr. could possibly be a woman at the time...It seems quaint and faintly ridiculous to read about it now, especially given the obvious feminist leanings of some of the stories, including The Screwfly Solution.

I don't think any readers would doubt that The Screwfly Solution has elements of horror, of tension and threat in its make up. But is it a 'strange story'? What I want to discuss in the context of this story is the ending; the resolution. In particular, does a 'proper ending' to a story kill off the ambiguity, the mystery that I've been arguing is central to how a 'strange story' works? Opinions may differ. And spoilers, obviously.

What do I mean by a 'proper ending'? Well, the kind that the stories featured in this series to date lack, and the kind that some kind of readers need. Both What Water Reveals and Where Are You Going, Where Have You Been? end before the presumed events of the story have - what happens to Connie after she gets in the car with Arnold Friend? The Willows might appear to have a more definite ending at first glance, but really although the two travellers escape to tell their tale, the full dimensions of what has happened to them are never fully known.

The Screwfly Solution tells the story of a world where violence towards women becomes epidemic, and spreads in patterns like an infectious disease. At first this homicidal misogyny seems religious in nature, spread by fundamentalist groups called 'The Sons Of Adam'. But when the peace-keeping force sent into the area also start feeling the same, the reader realises something worse is going on. The men who have killed so many woman (and girl children) all seem to see it as the most natural, logical thing in the world. It's a generally horrifying story as this violence sweeps the world, infecting even the lead male characters who have been trying to work out its origin:

The dreadful feeling of rightness he had experienced when he found himself knife in hand, fantasizing violence, came back to him...

The seeming lack of reason, of logic behind what is happening, makes it a genuinely disturbing read.

The story, maybe because of its genre, has a different kind of ending to that of The Willows or Where Are You Going...? Firstly, what is going to happen afterwards isn't really an issue (the world has pretty much ended, so not much...) But more importantly, although the reader has been kept in the dark about the cause of the events throughout the story, an explanation is offered at the end.

To be fair there have been hints at this beforehand, not least in the story's title, and the odd references to one characters research on insect behaviour and how to modify it. Anne living on what she can in the woods, hungry and suicidal, sees something (and really - spoilers!)

...I think they've done whatever it is to us. Made us kill ourselves off. Why? Well it's a nice place, if it wasn't for all the people [...] I saw it. It was there. But it wasn't an angel. I think I saw a real estate agent.

So there you go, ambiguity solved - aliens altered mankind's behaviour to make the males sexual urges turn to violence against women, then the aliens waited until the human race was extinct, and come to take the keys for planet Earth. Horrifying, certainly, but not strange, surely?

Well, maybe. The ending works really well, surprising but satisfying, and finally making sense of the title. But let's not forget that this conclusion is given to us from the point of view of a woman who has, in the space of about a month, gone from being a proud housewife and mother to being dirty and hungry [and] squatting in a swamp in mortal fear. She eats raw fish because she doesn't dare light a fire for fear the men of the local village (a 'liberated zone') will see. Her teenage daughter has been killed, by her husband. As far as she knows she is the last woman alive and she is about to kill herself before the winter cold does... And she thinks she's seen an alien.

Anne's repeated insistence that it was real, was there, show she knows how crazy she might sound, if anyone was there to listen to her. Is she really a reliable witness at this point? Even if she saw something, does one strange glowing figure really provide enough evidence for the cause of the story's violence?

The Screwfly Solution is a remarkable and horrifying story regardless of your view on this. But the really scary idea, to me, is that Alice is wrong at the end.