As I mentioned in my last post, Alan Ryker posted a pretty interesting piece about the horror genre the other day. Which got me thinking about the whole 'genre' concept in general. Some people have really strict definitions of horror, of sci-fi, etcetera, sometimes subdividing to a lunatic degree. It's essentially a book seller's view of genre, as opposed to a book writer's one.

Me I think of genre as more like food flavourings and spices. True, you get some books that are like, say, a curry. One flavour dominates. These are your true genre novels, if we have to call them that. But some of the most interesting cooks are those that use flavours and ingredients in new and exciting ways. Which is why we have cardamom ice cream nowadays, as well as curries.

The books below are all ones that I think of as being like cardamom ice-cream; they might not say 'horror' on the back, but they sure as hell have some of the tang of a horror story, at least to my palate. I've started with one where the flavour is strong and the case obvious to me, and moved on to some where there's a merest after-taste and you may disagree with me entirely; let me know in the comments.

Kafka - Metamorphosis and Other Stories 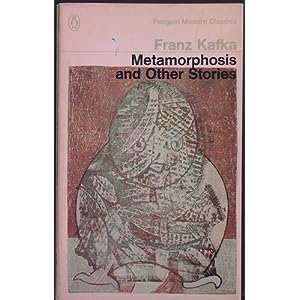 Now if you don't agree this tastes somewhat of turmeric, garam masala and cardamom, then you should probably stop reading now. While this is, from one angle, the surreal, modernist classic it's always talked up to be, stories like Metamorphosis, The Penal Colony and The Judgement have had an obvious impact on horror writers since they became well known. The obvious literary successor to Kafka would seem to me Robert Aickman more than anyone - The Swords or The Trains being blinding examples.

I studied this one at university. There was a lot of talk in the lecture halls and seminars about how it comments on modern nuclear families, on the media's obsession with either protecting or demonising young people, about autism maybe. And I agreed. And I said it was also a horror novel.

Notice the "also". I wasn't disagreeing with them that what they saw in the book was there, just that, look, here's something else too. Some cardamom, if you will. I mean, 'evil' children are a cliché in horror fiction and films, probably more so at the time the book was written than now. And it seemed a textbook example of how to get round the 'reveal' - that sometimes dreadfully clumsy moment where an author undoes pages and pages of suspense to reveal just what his or her monster is. Lessing doesn't do a reveal, the book seems to deliberately play with that expectation and then not satisfy it, in a way that I thought was interesting if not, well, fully satisfying.

I didn't think any of this was controversial or unjustified by "the text" as the lecturer insisted we call it, but you should have seen some of the looks I got. Some of the self appointed guardians of literature really don't like you sullying their word-view with genre fiction. Fortunately Lessing, with this book and the sci-fi of some of her others, ignores such philistines.

But of course, science-fiction readers don't always like it when you suggest there's an overlap between sci-fi and horror, either. I mean they'll accept Alien, which is basically Lovecraft in space, but not some of the genre's more intellectual output like that of Philip K Dick. I mean there's no monsters here, like there (arguably) are in The Fifth Child. And that's what horror is, right? Monsters?

No. Horror is an emotion, a spice... And often what it tastes like is this: the nagging, persistent feeling that although the world seems okay, something, somewhere, is horribly wrong. You can taste it in The Haunting of Hill House, you can taste it in The Shinning, and you sure can taste it in Philip K Dick's books. Again, I'm not arguing Time Out of Joint isn't sci-fi, it absolutely is. I just argue that doesn't mean it hasn't also got a tang and whiff of horror to it.

I suspect a few of you who were with me up until this point may be doubting me now. For a start, this is a play, not horror's most natural medium. And it's a play about plays, more specifically Hamlet, and two little people caught up in the action without understanding why. It's very funny, full of slapstick and philosophical humour, but also poignant too - the ending has always stuck with me. It's very British and a bravura display of word power and stagecraft.

Or, to describe R&GAD another way, it's about two people who begin to suspect that something, somewhere, is not quite right in their world... Sound familiar? Taste familiar?

Seriously, read it again (or read it, if you haven't - it's a play that works well on the page too). Aren't the initial signs a little bit, well, unnerving (those coin tosses)? When the characters try and reassure each other and themselves all is well, isn't that sinking feeling that they're wrong familiar?

And they all die at the end, which must count for something.

Now, after that post, I really fancy a curry...
Posted by James Everington at 19:51

You bring up some really great points James!

I think the genre delineations have become way too restrictive. I saw someone on Kindleboards the other day saying a book wasn't really SciFi even though it was about DNA manipulation and virus outbreaks. I shook my head at that one. It seems some people actually have a science term quota if you want to call a story SciFi.

I think SciFi especially has terrific overlap with horror! All the great monsters you can science up. Alien. <-- I think that's all I have to say about that.

I've never read R&GAD, but you make it sound immensely appealing. I do like my food spicy, and just a touch sweet. ;)

A very intriguing post. As soon as I saw the title on Kindleboards, I had to click and see what you had to say. You are correct, genres can be too restrictive, and many novels have shades of styles blended in.

That said--cardamom ice cream? It sounds wonderful, especially as I sit typing with a large iced chai next to me. :)

I like it, and now I have to check out The Fifth child, and I have to try to find cardamom ice cream.

Fowles' The Magus, DeLillo's White Noise, Lord of the Flies... My guess is that the critical theorists have more problems with noting the horror influences than the authors would.

And those are the classics. I think mixed-genre/slipstream/interstitial fiction is going to become so common as authors mix in their true influences that the genre police are going to look even more conservative than they already do.

My only fear is that straight genre sells better. I think you've got more people who see fiction as a way to kill time rather than as exciting exploration.

Well, it seems I have managed to make my readers either a) want to read some of the books I listed; or b) eat more ice-cream or curry

Alan - yes, how could I have not thought of The Magus and Lord of The Flies. The Magus has always seemed very similar to Shadowland by Peter Straub, have you read that?

Not read White Noise. So now I too have a new book to check out. As well as curry to eat.

Ah, yes, Lord of The Flies jumped into my head as I was reading this post. In my opinion, it's one of the greatest horror novels ever written precisely because it mixes some genres. Yet, my high school English teacher could never understand that perspective.

I agree with Coral in that genre delineations have become too restrictive. It's not only limiting to writers (in that they only sell well in straight genre categories) but it's also limiting for readers because they become trained to like or dislike fiction based on those labels. I guess the compartmentalization of fiction allows writers to find their niche audiences more easily.

I've read a couple of novels by Straub, but Shadowlands hasn't been one of them yet. It is in my tbr pile.

I think Turn of the Screw must have been an influence for The Magus, because it has that epistemic uncertainty. All the characters have to go on are their senses and their logic, but the first is conflicting with the second. It makes you realize how tenuous our connection to the world is, and it's definitely one of my fave types of horror.

Hesler, I think you nailed the dual-edged nature of strict genre: it lets you get to your niche audience, but then you're stuck with a niche audience, and that's restrictive.