In Defence Of Short Stories: An Intermission

It's been almost three months since I started putting up guest blog posts 'In Defence of Short Stories' and this is the first time since then that I've not had any lined up. I expect to have more soon (and readers and writers who'd like to do a piece should feel free to get in touch) but consider this week an Intermission.

But speaking of short stories, I was reminded of a (very) short story when 'talking' to the writer Vivienne Tuffnell on Twitter, who needed something short and spooky for a class she was teaching. I first read it in the splendid anthology Black Water, which is shamefully out of print (I notice new copies are going for close to 75 quid - I got mine from a charity shop for 50p...!) 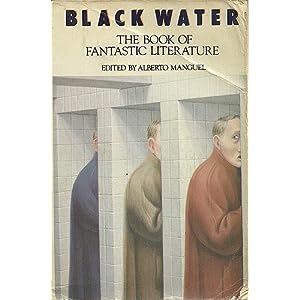 It's a huge anthology of creepy, scary stories, from writers both inside and outside the horror genre. The story below is the shortest one in it; indeed one of the shortest stories anywhere. It's also out of copyright so I can reproduce it here - hurrah! - and I think it's fantastic. It's from 1919, for anyone who thinks newfangled 'flash fiction' is actually new.

And it pretty much speaks for itself.

"How eerie!" said the girl, advancing cautiously. "--And what a heavy door!" She touched it as she spoke and it suddenly swung to with a click.
"Good Lord!" said the man. "I don't believe there's a handle inside. Why, you've locked us both in!"
"Not both of us. Only one of us," said the girl, and before his eyes she passed straight through the door, and vanished.

Posted by James Everington at 20:42

Email ThisBlogThis!Share to TwitterShare to FacebookShare to Pinterest
Labels: in defence of short stories

The students really did well writing the story to that climax.
I've also been very excited to be doing short stories as intermission from novel writing and have a collection planned for late autumn.
I've also realised that there is a market waiting, especially e-book-wise for shorts, and flash fiction.
good stuff, thanks James.
Viv

Cool - look forward to your short story collection. Let me know if you want to do a guest post on here for it...

I'd be very happy to do that.
Thank you.

Popped over from goodreads. Would be happy to do a "defence" post. You can hunt me down on Twitter @MAKozlowski