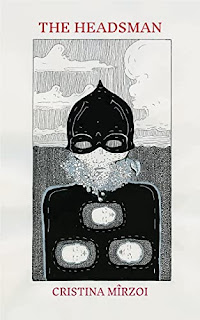 I recently reviewed the short-story collection The Headsman by author Cristina Mîrzoi, and it impressed me a hell of a lot. If you've not read it, do yourself a favour and pick it up here: The Headsman (UK | US)

After reading it, I reached out to her to ask her a bit more about The Headsman, writing in a second-language, her future writing plans, and the fun-filled topic of death as a theme in fiction...  After some delays on my part, you can read the interview below.

Take it away, Cristina:


So firstly, congratulations on The Headsman - it’s a fantastic piece of work. Could you explain something about what the book means to you and where your inspiration for it came from?

Thank you so much! It means a lot to receive peer feedback and I’m over the moon about the positive ones, as you can imagine.

During the pandemic, I made a habit of going to the nearby park to find a quiet spot for reading or writing flash fiction ideas. During one of those outings, I took Terry Pratchett’s Night Watch book with me. It was late April, almost May. The lilac trees smelled nice, the weather was lovely, and it brought up a vivid memory of a funeral that I attended years ago, during a warm April day in a cemetery filled with blooming lilac trees. That same day, as I was reading, I came upon a chapter where Vimes was visiting the Cemetery of Small Gods, where lilac trees were growing. I don’t believe much in fate or strange occurrences, but I took it as a good omen and brainstormed a few ideas. I wrote the 1st chapter as a standalone piece, then continued with the rest. For one chapter I even adapted a rejected flash story.

I have a lot of affection for The Headsman, since it’s my first lengthier piece in English and I am thrilled with how it turned out.


I understand you’ve written in Romanian prior to The Headsman, so I wondered what made you decide to write this book in English? Is it something you plan to do again in your writing? (I personally hope so, as I can’t read Romanian…)

Yes, indeed. I have written a children’s fantasy novel in Romanian, which is my native language. It was recently published by a local press. Working on this novel was very enjoyable and it’s very dear to me, however, I enjoy writing in English more. I believe writing in English gives me more flexibility as it has a richer vocabulary than Romanian. It’s also easier to find my crowd, since the international reading community is so diverse and more open-minded. Obviously, I was self-conscious at first, English not being my 1st language, but I got lucky in finding Dion (The FineToothed Comb) who helped with the editing part, and everything came together really well.

I have just finished the first draft for a novella, so hopefully it will come out soon. 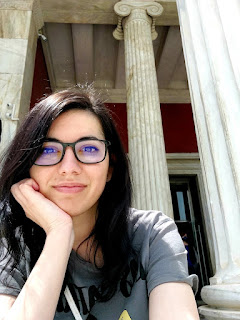 One thing I loved about the book was its structure: an interconnected narrative not quite a novel, not quite a short story collection. Did you have this structure in mind for the book from the start, or was it something that came as you were writing?

The 1st chapter was meant to be a standalone flash piece; it was as published in The Siren’s Call Publications e-zine’s Halloween edition of 2021. What drew me back to the story was the need to explore the backstory of the characters. Having the witch/duchess as the main character felt a bit overused, so the headsman’s POV seemed more intriguing. In the beginning, I thought of writing a bunch of separate stories where the headsman would be the only common thread. But this format of tales that focused on the people he was supposed to execute felt too impersonal; I wanted to get to know him better and explore the emotional side of the story.


Another thing I loved about The Headsman was how each story made me reconsider the ones I’d already read. It’s definitely a book that benefits from being read more than once - was this an effect you were deliberately going for? How did you go about weaving in all the cross-references and allusions to other tales in the book?

I am surprised at how many people have mentioned this. It wasn’t really my intention. At first, I thought it would be interesting to have all these different characters connected in some way; one’s actions to influence another’s, a bit like a domino effect. Soon after, I started adding hints and clues because it felt more challenging and fun for the reader (at least that’s what I hoped). As I child I was a Sherlock fan, so I like mysteries and puzzles. Some people have appreciated this, saying it was an engaging storytelling choice, while for others it felt a bit confusing.


Maybe I’ve got a dark and maudlin mind, but to me the main theme of the book seemed to be death, and how no one escapes from it, not even the Headsman. But enough about me—what do you think the themes of the book are?

You got it right. Death is one of the themes since the idea of the story came from the memory of a funeral. I also thought a lot about moral loss. Each character has this sort of tragic background that makes them act in a certain way, and I wanted for the story to work as a character study. There are many layers to one’s personality, and I didn’t want the characters to come across as one dimensional. All of them have a breaking point. It was important for me to explore how they got to that certain point.


How has the book been received? Marketing an indie book is pretty tough, and I imagine it’s even tougher when you’re written a book in a different language.

Well, to be honest, it hasn’t been easy, but I enjoyed it very much. In the beginning, I thought about using a pen name, something catchier and more marketable. Although I am Romanian; I haven’t been using local/Eastern European elements in my stories, so I didn’t feel the need to emphasize on my background. In the end, I decided against it, since I’m not interested in building a persona. Writing is a very liberating activity for me, so I wanted to keep it this way in all aspects.

The great part about this entire process has been the networking; being able to connect with a lot of readers, especially on Instagram, which were very supportive and provided me with great feedback and some indie authors that made me aware of how many outstanding books I had overlooked. The amount of interest surprised me; I didn’t think people would give a lot of chances to an unknown newbie with a weird surname. 😊

And finally, what next for you on the writing front? Can we expect another Cristina Mîrzoi book soon?

I mentioned earlier about finishing the 1st draft of a novella I had been working on. Deciding on a genre is tricky, but it’s somewhere between dark fantasy and magic realism. Characters from the classical fairy tale Hansel and Gretel have served as archetypes for creating my own characters, but this is not a retelling. It’s a story about a woman that is forced to face her past as she tries to gain closure on her childhood traumas. She’s an unreliable narrator, so the events occur at the crossroad between reality, delusion, and magic, at times turning into nightmarish situations.
The Headsman (UK | US)
Posted by James Everington at 11:48