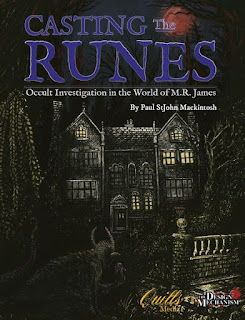 In my younger days, I used to regularly play RPGs, including AD&D, Paranoia, and most relevant here, Call Of Cthulhu, a role-playing game based on the writings of H.P. Lovecraft. It's a bit hazy in my memory, but I think I encountered Lovecraft's mythos via the game first, and then starting reading the fiction. So along with reading Campbell and King for the first time, Call Of Cthulhu was probably another formative stage on my journey to being a writer. (Although other than a tale in The Outsiders, I don't really write Lovecraftian mythos stuff.)

The new RPG Casting The Runes is based on the ghost stories of M.R. James (and mid-40s me much prefers M.R. James to Lovecraft). After getting the rulebook, I didn't know how I'd actually play the game, but via the wonders of Zoom, I revived the gaming group I'd played with 20 years previously, and ran a few sessions.

The rulebook for Casting The Runes is organised exactly as you might expect, with some introductory remarks followed by sections on character creation (characters here are called 'Investigators'), the game mechanics, monsters and magic, the historical time period, running games, and two sample adventures. The rules themselves are somewhat different to RPGs I've played before, especially when it comes to using 'Investigation Skills' which aim to avoid ludicrous, game-damaging situations where a highly trained investigator rolls a 1 and so misses a really obvious clue like a huge bloodstain right in front of their nose. As you might imagine, while combat features, players aren't super-heroes, and fighting the supernatural beings is likely to be more of a last resort than a significant feature of every play session. I thought the 'Stability' mechanic, allowing for the psychological impacts of player encounters with ghosts, black magic and like, was really well done, and adds a sense of tension and danger to even non-physical confrontations.

Where the book really shines is in the setting specific sections, both in giving the background for the Edwardian time-period, and information about running games in the style of M.R. James.  The two example adventures in the book are excellent introductions to the game. The book itself is really nicely presented, with period B&W photographs and creepy illustrations throughout really helping to set the tone.

The only downside of the rulebook for me was that I could have done with a few more examples of character creation and the rules in play. (The rules are tweaked versions of a more generic ruleset called Gumshoe, which I looked into online to get a feel for it.)

But overall this was a really interesting game, and both me and my friends had great fun playing it. And it was really enjoyable to come back to RPGs after all these years. Hopefully, we'll keep playing.

In summary, if you're an experienced role-player and are interested in an investigation focussed supernatural game, I'd highly recommend this. If you're new to RPGs and intend to be the run the sessions, there are probably easier first games out there, but if the M.R. James connection appeals to you don't let that put you off, you just might need to do a bit of online reading before stating your first game. There's also an friendly Facebook group run by the author where you can ask questions & find character sheets etc.

You can purchase the game online, in physical or PDF formats, at The Design Mechanism or DriveThru RPG.