Guest Post: ‘Writing the Body: I Spit Myself Out’ by Tracy Fahey 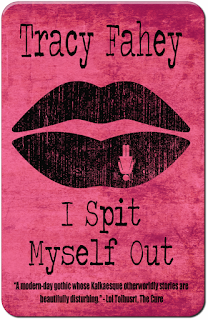 Today I'm delighted to welcome Tracy Fahey to the blog, to talk about her brand new story collection I Spit Myself Out, which is published tomorrow by The Sinister Horror Company. I'm a big fan of Tracy's previous two collections, so I preordered this one as soon as I saw it announced.

Tracy is always very articulate about her writing, both in person (I hope to chat to her again soon in some convention bar once all this strangeness is over) and, as you can see below, via the written word.

Take it away, Tracy:

‘Writing the Body: I Spit Myself Out’

In my third collection, I Spit Myself Out, I delve deep beneath the surface of the skin. The idea of this collection has haunted me for years; a collection of tales that would explore the terrors that arise precisely from being a woman. I’ve never been drawn to extreme horror, or to body horror (yes, I do see the irony here) as for me true horror doesn’t reside in the rending of flesh, the brutal exposition of the body. For me, true horror lies in the psychological implications of such a disruption. Horror happens when all that is sure and certain in our lives begins to collapse; our homes, our culture, our bodies, and most important of all, our very identity.

A recurring theme in my writing is that of identity that is called into question. Towards the end of my favourite movie, Alan Parker’s marvellous Angel Heart (1987), Harry Angel calls out desperately ‘I know who I am!’ But of course he doesn’t, and the impact of that tragic situation and the emotional dissonance behind it has never really left me. I’ve previously explored identity in different ways. In The Unheimlich Manoeuvre I explored the implications of feeling insecure in that securest of settings, the home; in New Music For Old Rituals I explored the Gothic horrors of buried secrets contained in our folk histories. In I Spit Myself Out, I attempt perhaps the most ambitious of all questions to do with identity – what happens when we feel unsafe in our own selves?

I’m a huge admirer of writing by Charlotte Gilman Perkins, Georgina Bruce, Sylvia Plath, Carmen Maria Machado, Margaret Atwood – work that presents us bluntly with the fears and vulnerabilities that arise from possessing a female body. The female body in their writing is one that is permeable to patriarchal repression, dominated and dictated to by religions, and marked by its own private blood rituals.

In writing this collection, I tried to tap into that sense of body horror; that emotional rawness, that overwhelming sense of vulnerability. The protagonists of I Spit Myself Out struggle with the outside world, but most significantly with themselves. Their pain becomes imprinted on exterior objects, like the Anatomical Venus of the opening story, ‘I’ll Be Your Mirror,’ it is literally too big to hold inside. As the story ‘Becoming’ opens: ‘It barely contains me, this body I’m in.’

Writing this collection, I was also conscious of the vulnerability of the female body under different gazes; the male gaze, the medical gaze, the female gaze. The stories, which attempt to chart a passage from birth to death, from puberty to menopause, are riddled with themes from Catholicism to love to the supernatural to illness. They’re also populated with transgressive bodies; ones that refuse to conform, bodies that cry out in protest. While writing these stories, time and time again I returned to Julia Kristeva’s essay, ‘The Powers of Horror,’ which deals memorably with the question of abjection and identity – she asks how identity is problematized when the body expels its own core substances; tears, blood, skin?

What happens when you spit yourself out?

I Spit Myself Out

I Spit Myself Out is a collection of female-voiced stories exploring the terror that lurks beneath the surface of the skin. In this collection, an Anatomical Venus opens to display her organs, clients of a mysterious clinic disappear one by one, a police investigation reveals family secrets, revenge is inked in the skin, and bodies pulsate in the throes of illness, childbirth and religious ritual.

Disturbing and provoking in equal turns, I Spit Myself Out reinvents the body as a breeding ground of terrors that resurface inexorably in the present.

You can pre-order it here, or you can directly from the Sinister Horror Company.