Some writers need silence to work, but I've always written to music. Indeed as far as I can remember I started writing about the same time I started taking a serious interest in music: taping indie tracks from The Evening Session (with Jo Wiley & Steve Lamacq) onto a C90 and listening to them over and over, trying to find artists and styles that I liked.

But enough about me; this is the first in a series of guest-posts from other writers who listen to music when they write. I've asked each to pick a few selections and explain why they like it, but more importantly how it affected their writers, what stories they remember writing to it etc. Brian Eno hasn't got round to recording Music For Writers yet, but there's no need for him to bother now.

First up is Andrew Hook, a fantastic writer (check out his novella The Greens as a taster) who despite me being an utter music snob has managed to pick five tracks I really like.

Take it away, Andrew:


I mostly listen to music when writing shorter works, and as I tend to write short stories in one sitting I find music maintains the headspace conducive to creation. It creates a bubble within which I am contained as a writer, and negates outside distractions. I won’t choose anything too abrasive or lyrically challenging, as this can work against the process, but anything subtle can help with ambience. And once I’ve begun writing, the music barely registers, it fades in and out of my consciousness, even when the same song is played over and over.

Occasionally, the music will bleed into the story. I’m fascinated as to how ideas can shift and shape purely from coincidence. Sometimes lyrics – misquoted or actual – can make their way into the piece, but this usually happens during a brief pause in the writing where the singer suddenly fills the gap. On those occasions, it almost feels like the song was specifically written for me to incorporate that fragment at that exact moment. Of course, this is true with other influences – snow falling, a dog barking – but I find there’s a certain serendipity with music which excites me.

Here are the five artists always on my writer’s playlist:

Bjork
I’ve written more stories whilst listening to Bjork than any other artist, usually the albums Vespertine, Vulnicura, and Music From Drawing Restraint 9. I find her music creates a mood perfect for writing, an all-encompassing sound which is more emotion than song, coupled with a literary sensibility which immediately allows me to settle in to writing without distractions. Stories written whilst listening to Bjork include 'Blood For Your Mother' (published in Black Static) and 'The Nomenclature of Fear' (a chapbook from – the unfortunately now defunct – In Short Publishing). When listening to albums on repeat, no individual songs stand out, so as with all these selections I’m going for a random track and in this case it makes sense to start at the beginning: 'Hidden Place'.

Blonde Redhead
This New York trio comprised of Italian and Japanese members first came to my attention through their Misery Is A Butterfly album in 2004. From more raucous beginnings their music has trod an increasingly ethereal path, and I’d recommend the above album plus 23, Penny Sparkle and Barragán as background music. Stories written to their music include 'Shipwrecked In The Heart Of The City' soon to appear in the anthology, Night Light (Midnight Street Press), which has a nightmarish, perhaps Lynchian quality, which I feel was assisted by listening to the Barragán album. For this selection, however, I’m going for the lighter song, '23'.

Echobelly
When listening to music I’ve found it important for any lyrics to be pushed into the background, to be almost subliminal when listening, otherwise I am much more likely to concentrate on the music rather than the writing which defeats the purpose. Echobelly have been a favourite for some time, but I couldn’t write listening to their first two albums because their power-pop jaggedness would intrude. Out of their later material, however, Gravity Pulls is a record I return to time and time again. There’s a soothing, tranquil quality which I find particularly effective. Stories written listening to this album include 'Memories Of Olive' published in Ambit magazine earlier their year, and 'The Easy Flirtations'. Both these stories form part of my ‘Hollywood celebrity death’ collection which is currently seeking a publisher. Here’s the title track.

The Flaming Lips
This band – with their psychedelic SF imagery and sometimes sweeping orchestral-like arrangements are perfect for certain types of stories, particularly their albums Embryonic and Oczy Mlody. I find them epic in the best sense of the word, evoking wonderment and positivity even when the subject matter is poignantly morose. I wrote my Bradbury-esque short story, 'The Day My Heart Stood Still' (published in a PostScripts anthology), listening to Embryonic, and a recent, Kafka-esque story, 'My Tormentors', listening to Oczy Mlody. It what whilst writing about a castle in the latter story that I realised through pure coincidence there was a track called 'The Castle' on the album. I love these weird connections which – even if there is no direct influence – tether one work to another. I’m choosing 'Evil' from Embryonic as an introduction.

Nick Cave and the Bad Seeds
I’ve dipped into Nick Cave over the years, but whilst I’ve usually enjoyed what I’ve heard I never wrote to his music until Push The Sky Away. Being an obvious storyteller, I think some of Cave’s work would be very difficult to have as background music, his lyrics dominant and intrusive, sometimes barked rather than sung, but Push The Sky Away hits the right chords for me to write (I should rework that sentence!), and there’s a definite bleed from the music into the fiction, an ambience of intent. Stories written include 'The Call Of The Void' published in Milk: An Anthology of Eroticism, and 'The Ice-Cream Blonde', another of my celebrity death stories which I consider to be one of the best pieces I’ve ever written. This is how the album begins:

I should also mention in passing the following artists I regularly write to: Coeur de Pirate, Anita Lane, Mercury Rev, Radiohead and Portishead.
Finally, whilst I usually listen to an entire album on repeat when writing a short story, sometimes it’s a single song. The record for this is 'The City Never Sleeps At Night' by Nancy Sinatra, which I listened to seventy times whilst writing 'Blanche' (published in the “Something Remains” anthology from Alchemy Press). If I’m allowed an extra track then it’ll appear below:

Course you're allowed an extra, Andrew!
Posted by James Everington at 16:54 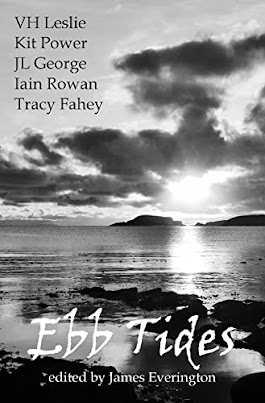