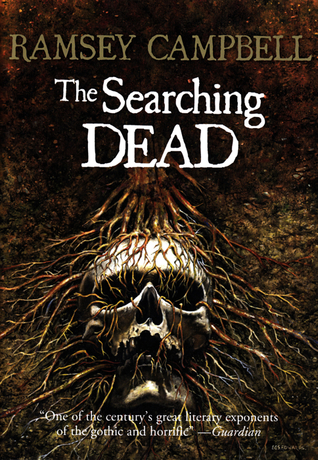 However one defines adulthood, I've been reading Ramsey Campbell's books all my adult life. Indeed, the discovery of his fiction (and its impact on my own nascent writing) feels like part of that transition to adulthood, a defining event. A bold claim to make for the purchase of a book of short stories for 50p from a second-hand shop in Cleethorpes, perhaps, but one that feels emotionally true when I look back now.

So it's apt that Campbell's latest work is based around just that change from youth to adulthood, that it so well describes the experience and embarrassments of beginning to write, and that it is told from the point of view of someone looking back at the events he describes. Worried that he may be imagining as much as he is remembering, creating significance where none appeared at the time - much as I am no doubt doing above.

The Searching Dead is the first volume in a trilogy called 'The Three Births of Daoloth'. And, while it's a book that could be written by no one other than Campbell, it also seems to develop something genuinely new from him: a strand of (pseudo)autobiography. It's set in 1950s Liverpool, a location effortlessly and expertly captured in Campbell's prose, a setting of vivid and concrete detail that still evokes the shifting and nebulous horrors so common to this author's fiction. Crucially, it's a time & place in the midst of transition, caught between the old world of rationing, respect for ones elders, omnipresent Christianity and a newer world yet to be fully visualised - a thought made disquieting by the narrator's hints at the dark way the world does change later, which we will presumably learn about later in the trilogy...

The narrator, Dominic Sheldrake, is also shown in a moment of change. The plot centres around Dom and two of his friends and their suspicions about Mr Noble, a teacher at their school. Noble is also involved in the local spiritualist movement, taking it over with his apparently genuine ability to rouse the dead... Dom has been reading Enid Blyton-esque children's fiction and it is this that spurs him into action. He thinks of he and his friends as the 'Tremendous Three' and imagines movie-like dialogue for them. But fiction, at least of the childish variety, is a poor guide and Dom and his friends' investigation does not go to plan.

The book is built around the classic horror motif of someone attempting to raise the dead, but beneath this conceit are reoccurring hints at something larger, at a cosmic horror that will surely become more explicit as the trilogy progresses. Not that this first volume doesn't build to a satisfyingly scary climax of its own. The Searching Dead is studded with some standout set-pieces - a faceless terror following Dom when he visits the cinema being particularly fine. But as ever with Campbell it's the atmosphere that really makes the book; he's a virtuoso at creating horror from small details, each seeming insignificant in isolation but which cumulatively hint at terrors Dom and his friends only partially understand. It's something he does better than anyone.

I've been reading Ramsey Campbell's books all my adult life, and yet he continues to surprise me. The Searching Dead is up there with his finest novels and I for one can't wait for the next volume. Highly recommended.