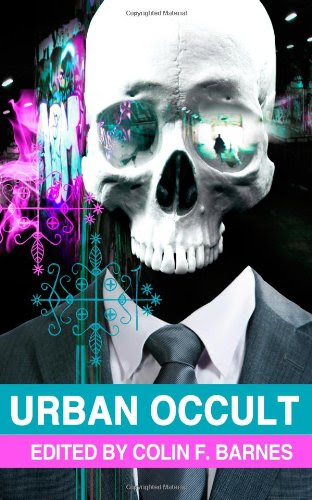 Urban Occult is a new(ish) anthology from Anachron Press, featuring fifteen short stories about magic and ritual in an urban setting. Unlike a lot of anthologies there's little to no deadwood here - all the stories are well written and worth a read. I've picked some favourites below, but that shouldn't be taken as a sly dig at the others. In fact, this is probably the best Anachron Press title I've read (and I say that having featured in one).

Just Another Job opens the book, and it's a typically dark tale from Gary McMahon; I'm sure you all know how bloody good McMahon is at short stories, right? There's some truly creepy imagery here (it reminded me of the Silent Hill games, for some reason) and an unrelenting atmosphere from the get go.

Spider Daughter Spider by Jennifer Williams. So how do you follow McMahon? Well, with another excellent story with some more truly, truly creepy imagery. Good god, Jennifer Williams, that final scene of yours will stick with me awhile, I can tell you.

Ren Warom's The Ghosts Of My City Walk. A story of lives wasted and an abandoned tower block, this was probably the bleakest story in the whole damn book - no easy achievement. It starts of building up the atmosphere... and then moves into a breathless final third. I really liked this one.

The Remover Of Obstacles by James Brogden. A bit of dark comedy to break up your horror anthology reading experience? Certainly, Sir. But I must warn you we do serve our comedy very dark here... Why, by the end, some people aren't laughing at all.

The Witch House - God-damn you, Mark West. On first reading, this story annoyed the writer in me because I couldn't see how it worked. It's a relatively simple story, archetypal maybe, and you just know it's going to end badly (kids breaking into a rumoured witch's house - like, duh), so why is it still so scary? After reading it a second time, I still don't know how it works, I just know that is does. God-damn you, Mark.


Finally, I'd like to mention The Strange Case Of Mrs West & The Dead by Sarah Anne Langton - a funny story about an exorcism of a most unconventional kind, and it works almost solely because of the author's skill in first person narration, it's that good. She also did the excellent cover art, I hear. Hats off, madam, hats off - to you and all the fabulous writers in Urban Occult.


And a quick note to say that, as well as The Other Room, I've now released The Shelter in paperback format. So if paper's your thing, fill your boots: Amazon UK | US | Createspace.
James Everington at 16:54
Share