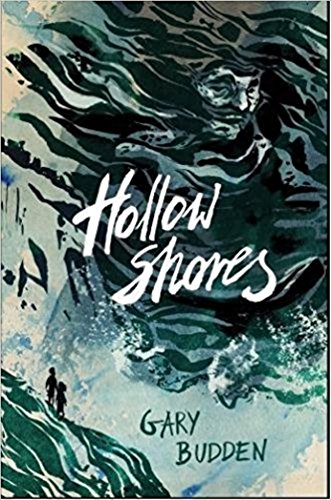 Isn't it great when a book turns out to be something different and more exciting than you were expecting?

I'd read and very much liked a couple of Gary Budden's stories in Black Static and Best New Weird, so I was expecting his debut, Hollow Shores, to be a well-written and interesting collection of psychological weird fiction. And there's certainly that element; but Hollow Shores is so much more. It's one of those collections of stories that's greater than the sum of it's parts, where each piece manages to be complete in itself while also part of a wider whole.

As this suggests, the stories here are interrelated, but the connections between them aren't plot-based so much as each piece occupying an overlapping physical or mental space. The characters of each story are linked to those of others by genealogy, geography, or just being at the same punk gig at the same time. Someone might have the starring role in one story, but be little than a background actor or the subject of mere rumour in the next. Tales are passed between people or down the generations; they mutate and change focus as a result, producing a shared if unacknowledged mythology for the people of Budden's titular coastline, of Kent, London, and further afield. And crucially, it's a narrative space that you as a reader feel as much a participant as a spectator in. As the first piece, the excellent 'Breakdown', says: "The story is mine now."

As such, it would be somewhat self-defeating for me to follow the usual review route here and list my favourite stories from the book*. Instead the whole reading experience forms a gestalt in my mind, a composite of imagery, meaning, and language, which probably says as much about me as the book itself: the liminal spaces of beaches & off-season seafronts; birds heard rather than seen; strange tall figures glimpsed in the mist; the insinuation of corporate branding into our inner lives; the time machine of music; invasive weeds twisting up through the concrete of railway platforms; Whitstable Bay beer; nostalgia for the moment even as it's happening; the quiet miracle of seeing a red kite overhead.

The majority of these stories are non-supernatural, but the natural world often seems as uncanny or strange as any mere spectres. In 'Baleen ' for example, a dead beached whale has the same aspect as the weird trappings of stories like 'Breakdown' and 'Greenteeth': the whale is an alien being from a different world, suddenly erupted into our own.

As I said, it's a different book to what imagined going in, and all the better for that: why would I want to read a book that I could imagine? Instead, what I got was a piece of writing both personal and communal, something unique from Budden that impressed me no end. I wouldn't hesitate to recommend it, despite my rather unfocussed description above. It's simply brilliant.

* but fucking hell, 'Spearbird' deserves a special mention
Posted by James Everington at 20:59