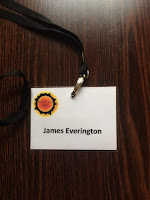 In which I never quite know what to say, to be honest. How to sum up a weekend like Fantasycon? Three days of books, great conversations, books, friendship, nice food, books, booze, books, very late nights, and books. It all seems completely normal when you're in the Fcon bubble, and its only when you're back in the real world and attempting to talk to strangers on the train about Shirley Jackson that you realise again how special it is.

The events I was part of were all brilliant. On Friday I took part in the horror reading session, with Kit Power and Jonathan L. Howard - a great session, which showed off the range of different horror fiction around at the moment, with Jonathan's clever Lovecraftian pastiche, Kit's very dark tale during which he pulled out a real hammer and my, well, densely-written creepy shit.

On Saturday I took part in a panel on horror writing with an absolute hero of mine, Ramsey Campbell, and another writer I immensely admire, Nina Allen. Not nervous at all, honest guv. Fortunately my good friends Mark West and Phil Sloman were also part of it, and it was an amazing session. The 50mins flew by (ably moderated by Helen Armfield) and I could have talked for twice as long with everyone - like the best panels it felt like a chat between friends and colleagues, not a back and forth Q&A. A real highlight.

Sunday saw me take part in another panel, this time on putting together anthologies. Whether I was as qualified as the other participants - Peter Mark May, Stephen Jones, Colleen Anderson and Peter Coleborn - to talk about such things, having only done The Hyde Hotel and Imposter Syndrome, the audience can decide, but again I found it hugely enjoyable.

Other great moments included John Llewelyn Probert's brilliant reading at the Great British Horror launch; the Weird Fiction panel; the fifteen minutes of the disco when they played decent music and, well, just chatting to everyone.

Email ThisBlogThis!Share to TwitterShare to FacebookShare to Pinterest
Labels: Fantasycon