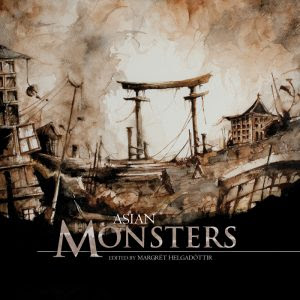 Asian Monsters is the third anthology in the 'Monsters' series from Fox Spirit Press, following on from European Monsters and African Monsters. It's a beautifully designed book, with evokative, sepia-tinted cover art from Daniele Serra and interior art from a range of artists. Two of the stories are in the form of comic-strips too.

The fourteen stories here (edited by Margret Helgadottir) take creatures from various strands of Asian folklore and give them new twists. If, like me, you're as boringly British as they come, you'll be sure to find beasts and creatures new to you in these pages. As such, it's an anthology that feels more original than many. I assume that most of these tales are based on old myths and folktales, but the the stories in Asian Monsters all feel like fresh retellings, the authors using their stories to investigate contemporary and human concerns.

Every story here is worth reading; here are a few words on my personal favourites:

'Good Hunting' by Ken Liu exemplifies the combination of the traditional and the modern I mentioned above; indeed it's about the journey from one to another. This story starts with a familiar setup–a demon-hunter seeking out his quarry–but ends up somewhere completely different, as the magic of spells and tradition is replaced by that of industry and modernity. It's a spectacularly well written story about how both the demon and the hunter adapt and thrive; in its scope its the equivalent of that jump-cut from 2001.

One of the most disturbing monsters in the anthology is to be found in 'Datsue-Ba' by Eliza Chan. Here, the traditional and the modern appear to be in conflict. The central characters are as modern as they come: two unmarried lovers enjoying a break at a Tokyo onsen; but they are unaware of the spirit-like creature there with them, one who sits in judgement over their actions and characters. But while it is a story about judgement, it's unclear whether justice has been delivered, or whether just the stale diktats of dead tradition enacted.

Aliette de Boddard's 'Golden Lillies' also sees the values of the traditional past being forced upon latter generations, although in this case the monster (a deceased ancestor) is actively sought out, by a young woman about to marry. The story is based around the horrific practice of foot-binding, and the reader might wonder if the 'help' the spirit offers is really aid at all, or merely pointless pain and torment.

EeLeen Lee's 'Let Her In' tells of the relationship between mother and daughter, the latter returning from the dead after being forced into an absuive marriage. A wonderfully poignant piece about revenge, cross-generational relationships, loss and love.

Perhaps the best story of all, and certainly the scariest, is 'Blood Women' by Usman T. Malik. Set in a contemporary Pakistan, young children already facing the horrors of bombs and drone-strikes realise that something even more monstrous is out there. It's a vividly conveyed setting, and it's testament to Malik's skills as a writer that the monstrous element still has the ability to shock and scare against this all too human backdrop.

All in all, Asian Monsters is thoroughly recommended (UK | US)
Posted by James Everington at 21:31