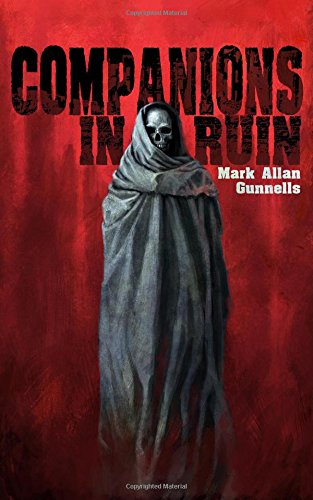 Another guest post on the blog today, this time from highly talented author Mark Allan Gunnells, whose new collection, Companions In Ruin is out now (UK | US). In this piece, he talks about putting together the stories for the book.

Take it away, Mark:

Gathering Old Companions
As a writer, short fiction is my passion.  I enjoy writing novels and novellas, but short stories are where I’m happiest.  As such, when I was a young unpublished author and I would dream of making my mark in the literary world, collections with my name on the cover are what I would dream of.
In 2004, I started selling short stories to various magazines, ezines, and anthologies.  This went on for years, while my attempts to interest publishers in a collection fell flat.  Even after I started publishing novels and novellas, it was still almost impossible to sell a collection.
Those days are thankfully behind me now.  There are still plenty of publishers that aren’t that interested in collections by unestablished authors, but over the last few years I’ve managed to find homes for 7 different short story collections.  I’ve had the privilege to work with some great publishers and get a lot of my short fiction out there.
My most recent collection is through Sinister Grin Press, COMPANIONS IN RUIN, and with this one I wanted to take a slightly different approach than with my previous collections.  For the most part, in the other 6 I really focused on previously unpublished short stories.  I figured the stories I’d published in magazine and anthology markets had been out there for people to discover and I wanted to use the collections to highlight stories that would be new to people.
However, when coming up with the table of contents for COMPANIONS IN RUIN I started to think that so many of the markets in which I had published these early stories were so small, many of them now defunct, and chances were slim they’d been read by very many.  So I decided this might be a good opportunity to give a new life to some of my more obscure stories.
Which isn’t to suggest COMPANIONS IN RUIN is made up exclusively of previously published tales.  I’d say approximately half the stories have never saw print before, but the other half have appeared in markets before, though many of them will still be unfamiliar to most of my readers I’d imagine.
I went so far back as to include my first published story, “Rebecca Weston Speaks the Truth.”  It was actually the second story I ever sold, but it actually saw print first in an ezine called Alien Skin.  I went on to sell several stories to that market, though it sadly no longer exists.
Back in the early days, I cut my teeth in a lot of small ezines like that.  Stories like “Along for the Ride,” “True 2 Life,” “Debt,” and “Before and Aftermath.”  The collection also contains the first two stories I ever got paid professional rates for, “Ours is a God of Anger” and “The Jesus Shoe Store”, from a magazine called Withersin.  Several  of the stories were entries in a bi-weekly flash fiction contest hosted on the Shock Totem website, and a handful appeared in various anthologies.
It was actually rather fun to revisit these older tales, doing some polishing and revision on some, leaving others as they were originally published, and getting them ready to reintroduce to the world.

Mark Allan Gunnells loves to tell stories. He has since he was a kid, penning one-page tales that were Twilight Zone knockoffs. He likes to think he has gotten a little better since then. He loves reader feedback, and above all he loves telling stories. He lives in Greer, SC, with his fiance Craig A. Metcalf.
Companions In Ruin UK | US

Posted by James Everington at 13:29