The Hyde Hotel is OPEN... 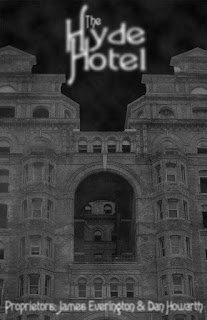 The Hyde Hotel officially opens its doors today. Published by Black Shuck Books, it's the first anthology I've ever edited (alongside Dan Howarth). I first had the idea for a book of stories all set in the same hotel a number of years ago, and it's taken awhile to bring to fruition... So big thanks must go to Theresa Derwin, Steve Shaw, and most importantly to all the authors involved who put up with a few delays and all contributed such fine stories. It's genuinely one of the books I'm most proud of being part of.

The Hyde Hotel is available in both ebook and paperback formats - all links at the Black Shuck Books website.


The Hyde Hotel Welcomes You…

The Hyde Hotel looks almost exactly as you’d expect it to: a faceless, budget hotel in a grey city you are just passing through. A hotel aimed at people travelling alone, a hotel where you know so little about your fellow guests that they could be anyone… and where, perhaps, so could you. But sometimes things are hiding in plain sight, and not everyone who stays at The Hyde gets a good night’s sleep…
Enjoy your stay.

Posted by James Everington at 10:00