It's Christmas come (slightly) early on the blog today, with a gift from the ultra talented Mark Allan Gunnells in the from of a short story, The Boy Who Killed Santa Claus. You can find details about Mark's new collection below the story.

Take it away, Mark:


THE BOY WHO KILLED SANTA CLAUS

Seven year old Henry Childers crawled reluctantly under the covers of his bed. “But, Mom,” he whined, “I’m not sleepy. Can’t I stay up a few more hours?”
“It’s almost ten already,” his mother Tonya said with an indulgent smile. “If you don’t get to sleep, Santa won’t stop here tonight.”
“Do you think Santa got my letter this year?” Henry asked, sitting up against the headboard.
“I’m sure he did, honey.”
“’Cause I don’t want it to be like last year.”
Tonya sighed heavily and rubbed at her temples. She’d been hearing this same tirade from her son for an entire year now. “Henry, there was nothing wrong with what you got from Santa last year.”
“I asked for an XBox, and he gave me a Playstation. It’s not the same.”
“As I’ve told you a hundred times, maybe Santa was all out of XBoxes,” Tonya said, pulling the covers up to just under Henry’s chin. She and her husband had gone to every store in the city looking for an XBox last year, but they’d all been sold out. It had been a Playstation or nothing, but still it hadn’t satisfied Henry.
“I mailed my letter in October last year,” Henry said. “That gave him plenty of time to have his elves whip me up an XBox.”
“Henry,” Tonya said, a little more sharply than she’d intended, “you’re being awfully ungrateful. There are children in the world who have nothing. If you don’t start being more appreciative, Santa may decide to just skip our house altogether.”
“Okay,” Henry said, his lower lip poked out like a shelf. “I’m sorry.”
“Just get to sleep,” Tonya said, leaning over and kissing her son on the forehead. “When you wake up in the morning, you just might find that bike you’ve been wanting waiting under the tree.”
“You think Santa will like the cookies and milk we left for him?” Henry asked.
“I’m sure he’ll think they’re delicious. I’ll see you in the morning, sweetie.”
Tonya turned off the light, the small nightlight plugged into the electrical socket by the closet throwing a muted yellow glow throughout the room. She eased the door closed, leaving Henry to dream of Christmas morning.

“Do you think it’s safe to start?” Jonas Childers asked his wife. They were sitting in the living room, watching a SciFi channel marathon of the Silent Night Deadly Night films.
Tonya glanced at the clock, saw that it was just past one o’clock in the morning. “He should be sound asleep by now,” she said. “I think we can get started.”
“Good,” Jonas said. “It’ll probably take me ‘til dawn to get that bike put together.”
They went up to the attic, careful to avoid all the squeakiest boards, and brought down all of Henry’s presents. Tonya began arranging all the smaller gifts around the tree while Jonas unfolded the instructions for the bike and began assembling it.
“Shit,” Jonas cursed under his breath, trying to fit together two pieces that simply refused to fit together. “As much trouble as this is, Henry better like this damn bike.”
Tonya knelt next to her husband, took the uncooperative pieces and easily snapped them together. “Are you kidding? He’ll absolutely love it.”
“He better. I don’t want to have to go through another year hearing him bitch and moan like he did about that damn Playstation.”
“It did get a bit tiresome,” Tonya said with a giggle. “But Henry just wants what he wants, and he won’t settle for anything else.”
“Like mother, like son.”
Tonya swatted her husband on the arm. “That’s not true. I settled for you, after all.”
“Very funny,” Jonas said. “How about you settle for passing me those cookies.”
Tonya had baked a batch of oatmeal raisin cookies, half of which her family had eaten, the other half of which had been placed on a plate for Santa. She took the plate and handed it to her husband, who immediately scarfed down two of the cookies.
“Careful,” Tonya said, reading over the instructions. “You keep that up, you’ll soon be fat as Santa.”
“This isn’t for me,” Jonas said around a mouthful of cookie, spewing crumbs like a fine mist. “It’s for Henry. Think how disappointed he’d be if he woke up and saw that Santa hadn’t eaten the cookies he left for him.”
“Don’t talk with your mouth full,” Tonya said with a smile.
“Hand me the milk, please.”
They did not leave out a glass of milk for Santa since that would curdle, but they placed it in a thermos to keep it cold. Tonya passed the thermos to her husband.
Jonas popped the top of the thermos and gulped down several swallows of the milk. Suddenly he retched, spitting milk into the air like a geyser, the thermos dropping from his hand and leaking its contents onto the carpet. Jonas clutched at his throat, making strangled gagging noises as milk and blood dribbled down his chin.
Tonya screamed and grabbed her husband as he collapsed onto her lap. His body was jerking with violent spasms, his eyes rolled up to the whites. He coughed violently, and more frothy blood sprayed Tonya’s arms, and she thought there were chunks of tissue mixed with it.
“Oh God, Jonas,” she screamed, crying. “What’s wrong? What should I do?”
“What’s going on?” Henry said, stepping into the room wearing his pajamas, rubbing the sleep dust from his eyes. “I heard screaming.”
“Henry, get the phone and call 911,” Tonya yelled frantically. “Something is wrong with your father; he needs an ambulance right away.”
“What is it?” Henry asked, wide-eyed, stepping further into the room.
“Henry, call 911 NOW!”
Henry started to turn toward the phone, but then he spotted the spilled thermos of milk and froze. “Did Dad drink the milk?” he asked, snatching up the thermos and waving it at his mother.
“What?” Tonya said, feeling her husband’s spasms tapering off, afraid to contemplate what that might mean.  “Your father needs help.”
“Did Dad drink the milk?” Henry said again, his old stubborn self. “This milk was for Santa Claus, not for Dad.”
“Henry!” Tonya screamed, desperate tears of frustration and helplessness streaking her face. “This isn’t the time—”
“THIS MILK WAS FOR SANTA CLAUS, NOT FOR DAD!” Henry roared, throwing the thermos across the room.
A numbness began to spread throughout Tonya’s body, starting in her chest and reaching out through her limbs. Comprehension came slowly, and it made her feel cold inside. Cold and empty.
“What did you do?” she croaked, her voice raw and raspy. “Henry, what did you do to the milk?”
“I poured Drain-O in it,” he said matter-of-factly, as if stating that he’d brushed his teeth.
Tonya was on her feet in an instant, the still form of her husband stretched out on the floor. She grabbed Henry by the shoulders and shook him, shook him hard. “Why would you do such a thing?” she shouted into his face. “Why in the name of God would you do such a thing?”
“I wanted an XBox!” Henry shouted back, wrenching out of his mother’s grasp. “Not a Playstation, an XBox, and Santa knew that. He knew that, and he gave me the wrong thing anyway. I wanted to teach him a lesson, make him pay for giving me the wrong gift last year.”
Tonya stumbled back, hands to her mouth, and watched as her son turned and ran back to his room, slamming the door behind him. She snatched up the phone and quickly dialed 911 while Santa chopped up a topless teenager on the television behind her.
© Mark Allan Gunnells 5/26/06 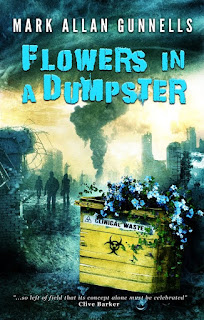 If you enjoyed Mark's story, be sure to grab a paperback or Kindle copy (available in Kindle Unlimited, as well) of his Flowers in a Dumpster short story collection - out now from Crystal Lake Publishing.

“…hilarious and horrifying, as all great satire must be. An interpretation so left of field that its concept alone must be celebrated.” – Clive Barker

Posted by James Everington at 10:30