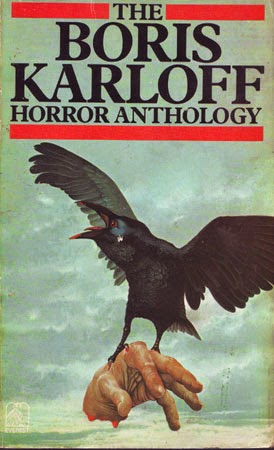 Take it away, Anthony:

I was a fan of Theodore Sturgeon years before I even knew he existed. What I mean is I’d enjoyed some of adapted work when I was a kid from his original Star Trek scripts to the classic B-movie Killdozer. I’d read a few of his short stories in anthologies over the years too without registering his name. I never used to check on author names when I was younger. I just assumed these were one off, long dead writers who didn’t need investigation. When people would discover my love for genre fiction they’d often tell me to check out Sturgeon. “But I don’t like sci-fi” I’d say. They’d look at my shelf with Vonnegut, Clarke, Boulle, Robert J. Sawyer, Matheson, Philip K. Dick, Bradbury, Jack Finney and raise a weary eyebrow. I thought Science fiction was about new worlds, huge spaceships and invented languages I couldn’t be bothered to read, all packaged in paperbacks with colourful worlds and sexy aliens on the covers.

Then one day I picked up a handful of tattered anthologies from a local charity shop. The stand out book was The Boris Karloff Horror Anthology that contained one story in particular that blew me away. It was The Graveyard Reader by Theodore Sturgeon.

The story lives beneath the words, almost hidden. I don’t mean it’s vague or trying to be self-consciously obscure, just that it runs deeper than what you see on the page. Like the silence between the notes of a powerful Requiem. It’s also a story about language. It examines how we use language, the way we absorb it and how people have their own grammar.

Sturgeon makes us question the quantity of truth we allow ourselves to tell. How retelling can make lies from truth, or elevate monsters into saints. Graveyard reading gives everything. It never subtracts from the truth, it shows without exception however uncomfortable.

The Graveyard Reader is also a story of anger. The anger born from betrayal. A poisonous rage that curls nettles around the heart until the only beat is an echo of love. The story is a simple one. A man tending the grave of his dead wife, a wife who he discovered through her death was cheating on him. Her headstone remains unmarked; all he feels are the flint spark words cut in his own stone heart. During this ceremony of weeding and tending the newly dug plot, that seems designed purely to purge his anger and assuage his dented pride, he encounters a stranger. A man who claims he’s to be a graveyard reader.

The man teaches him how to read the fall of leaves, the turn of soil, how shadows cast across the grave tells a story. Every element from rain to the blaze of sunshine reveals more secrets. It’s an atavistic language of symbols and definitions. How two sticks lay across each other will reveal how the person loved in life, or a snowflake that melts slowly may unveil hidden secrets they kept from loved ones for example.

After a year the widower masters the language and reads the story of his wife. The nuances of the symbols tell him everything he wanted to know, perhaps too much. What he does with this information is astounding, a final act that will surprise you. Sturgeon gives the reader a real cutting ending, a stone cutting ending you may say.

The Graveyard Reader had a enormous influence on my own writing and the stories I seek out. I like to add layers to my stories that need digging out. I plant flowers throughout my plots that look like nettles on closer inspection. I use symbolism, though not to seem clever or abstruse, I use it to add richness to my stories. These usually come naturally and I often only discover them myself after finishing. I hope I add those tones between the notes, the whispered timbre in the silence between words. All of these aspects I took from Sturgeon’s strange tale The Graveyard Reader. Mostly I hope the lesson I took from Sturgeon and The Graveyard Reader in particular is that emotion is as vital to a story as any other component. But the real emotions should never be revealed too early, let them hide behind the opposite feelings for a while.

Posted by James Everington at 21:06

Fascinating article, Tony. I too have never knowingly read Sturgeon but I shall seek him out now - despite also not being a sci-fi fan for exactly the reasons you mention (slaps own wrists).

Your own writing is as deeply beautiful at the very least, as how you describe The Graveyard Reader. Your nuances are a rippling undertow of your stories. Sometimes they rise like a terrifying wave, oftentimes they ebb and creep - hidden suggestions that can be more powerful than the overarching story itself.

And The Brittle Birds? Exquisite.

Great post, I want to read Sturgeon now (haven't done so before).