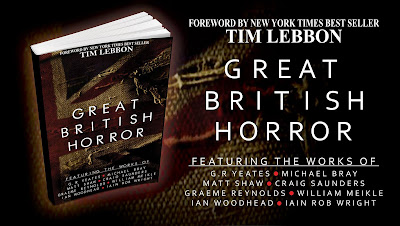 Today I'm very pleased to feature as a guest post an extract from one of the stories in the book - The Thing Behind The Door by GR Yeates:

It was dirty and quiet inside the Old School.
John was alone there. How he came to be there, he did not know, could not remember. Soiled shapes fluttered and scampered away from the sounds he made. Many had passed through here, tramps and vagrants. He saw their dried excrement everywhere, all of them were gone now, having found somewhere else to go. There was always somewhere else to go, so they said. His life was spun out, leaving him dangling by a single fraying thread. There was nothing left in this world for him, no-one for him to turn to, no home for him to go to. Nowhere but here, this place, where he now stood, on the boundaries, heavy yet empty, brimming over with nothing.
Sullied, grey light streamed in through neglected windows. He passed what was once the boy’s toilets, now it was home to a rich, rotting smell. Gagging, he quickly left it behind. There were tears in his eyes, a tremble to his hands. He reached out into the thin air, out to the Old School, out to what once was.
And he felt nothing.
There should have been understanding here, in this desolate place, for what he had done, it knew him so well after all. In his dreams he had come back here, so many times walking these halls, listening to the soft heartless laughter of the past, hearing his name again and again, seeing their faces in the broken squares of green-wired classroom glass. And yet nothing responded to his being here. He had bared his soul for no purpose. There was only this silence, with voices.
Nothing left but this and shadows gathering.
He ran his fingers through the dirt on desks, scratching his fingernails over woodcuts made by long-gone protractors and pocket knives, reading the runes of lonely adolescent lives. The carved-out memories, exhumed aches and pains. Tracing the juvenile outlines of an urban Ouija.
He was a shaman preparing ritual ground.
He stopped. He could hear footsteps. Not alone, not here, no more, he stood still. Waiting, listening, praying. The footsteps came to an end. Nothing but woodworms crawling and mice lightly scuttling here and there, that’s all, nothing to be afraid of. Nothing here but debris settling comfortably into ruin. He blinked a speck of grit from his eye and the footsteps began again, light but not soft, like bare feet pacing back and forth, back and forth, back and forth, impatient, waiting, gathering into temper.
He followed the sound of those feet.
There were the stairs.
Varnish had eaten away the banisters, leaving them as blight-white limbs, moist and sappy to the touch. The footsteps, they kept on going, pacing, pacing, pacing, relentlessly pacing above. Hairless rat carcasses and extinct spiders were the litter in his way as he climbed, ducking through veils of abandoned webs heavy and low with long-dead vermin and flies. The footsteps, moving quickly, so very quickly, back-forth, back-forth, back-forth, a desperate rhythm increasing, a frustration seeking release, some crescendo. Soon. Were they to meet him, those ferocious feet?
Would Little Spider finally meet Big Spider?
Fearful thoughts passed through him as half-forms. The splinters from the graffiti runes remained buried in the flesh of his fingertips, he could feel them stinging, hot and freezing, cold and burning. The footsteps then stopped. Where? There, at the top of the stairs. He could feel such a shivering growing inside his chest, he hoped that he could bear it as he pushed through the pale clinging tapestries. It was here, something, some part, some piece of his being became lost long ago, somewhere on these very stairs.
But where?
He looked up to the top of the stairs, and there it was.
Waiting in silence, dripping and dead, draining to see, its crawling form, layer upon layer of countless corpse-grey flies caught and struggling in its mass, and within, a silence with voices, and all of them were screaming, screaming and screaming. 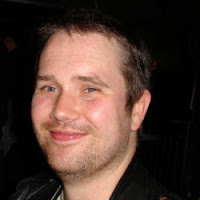 G.R. Yeates is the critically-acclaimed author of The Vetala Cycle – a historical horror series set during WWI that combines vampire folklore with cosmicism. His work has appeared in anthologies published by Dark Continents Publishing, Cutting Block Press & Static Movement.
He was born in Essex, England and was brought up in seaside towns along the South-East coast. He studied English Literature and Media at university before spending a year in China teaching English as a foreign language. He moved to London in 2002 and has lived there for the last decade working in a number of different jobs and training as a singer before self-publishing his debut novel in 2011. You can find out more about G.R. Yeates at http://www.gryeates.co.uk
Posted by James Everington at 14:00