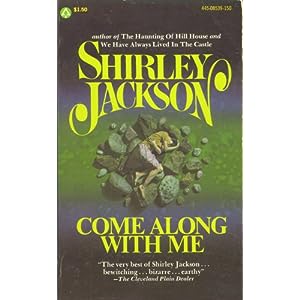 Strange Story #19: The Beautiful Stranger
Author: Shirley Jackson
Collected In: Come Along With Me
Anthologised In: The Dark Descent

What might be called the first intimation of strangeness occurred at the railway station...

For me, the best of Shirley Jackson's novels and short stories are among the very best the genre has to offer. (Frustratingly, not all her books are easily available in the UK, although I believe Penguin is rectifying that in 2013.) The Lottery is by far her most famous story but she wrote many others equally as good if not better. The Beautiful Stranger is one such tale, a mini-masterpiece in a few thousand words. Warning: it's hard to describe without spoilers.

It begins with the words I quoted above, but then proceeds to describe a rather mundane, humdrum situation: a wife waiting at a train station for her husband, who is returning from a work trip to Boston. Margaret is slightly worried because she argued with John before they parted, but other than that everything seems normal. (Jackson is always spot on when writing about families and their interactions.)

But back at home, Margaret looks at John and thinks:

The story describes Margaret's conviction that the man who has returned from Boston is not her husband, (despite his acting the same, speaking the same, dressing the same) but the beautiful stranger of the title. Beautiful - for this isn't a body-snatcher tale of paranoia and fear; Margaret doesn't want the man to be her husband. And whether he is or not (somehow it almost seems a moot point to the story itself) there does seem to be a genuine relief and happiness felt by Margaret; a genuine, albeit small, realignment of their marriage that was perhaps troubled. How could that be, if 'John' wasn't actually the same person? But then, how could it be if he was?

It is he reader, not Margaret, who is unnerved - how much of what is happening is in Margaret's head? Her own behaviour to 'John' changes when she thinks he is someone else; is that the cause of his supposed differences? Who changed first?

The ending of the story is troubling and ambiguous - it's probably no surprise that Margaret's new happiness was more fragile than she might have supposed. The last few sentences seem to hint at a whole different explanation for the proceeding events, without being quite clear what that explanation is. Certainly the tale as a whole seems to be a (feminist) warning about the dangers of living your life through and for other people and of the seductive danger of fantasy (many of Jackson's heroines are dreamers). But there's room for endless interpretations here, and endless rereading. It truly is one of those tales that can be read again and again; one that despite its short length is bottomless.

Posted by James Everington at 16:30