A quick review of The Little Stranger by Sarah Waters. I thought this was a stunning achievement in terms of character voice and point of view; in terms of period detail and depiction of a changing society; and in terms of its use of an unreliable narrator. 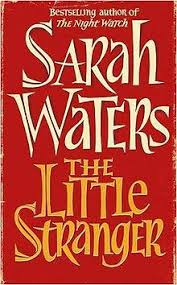 The book is set in post WW2 England, and the narrator is a local Doctor with self-confessed humble beginnings, who gradually becomes involved with the old-money family who live in Hundreds Hall. As in all classic ghost stories, the house is central to the tale, and Hundreds, with its boarded up wings and echoes of former glory, is a great haunted house.

The supernatural element is disturbing and creepy, and it only gradually dawns on the reader that there might be another explanation other than the rather obvious haunting initially suggested. From the reviews, some people seem to think the twists and ambiguities in the novel end here, but I disagree. There's ample evidence of multiple theories - that there is a specific spirit haunting the house; that someone living is psychically responsible; that someone living is responsible in a rather more mundane way; or that the house itself, like Hill House before it, is preying on each victim's weaknesses. There doesn't appear to me to be any definitive explanation (indeed several of the above could overlap) and foe me the book displays the same kind of eerie ambiguity as The Turn Of The Screw.

What frightens us most is what we don't know.
Posted by James Everington at 10:47

Your excellent review makes me want to read this book.

Was a great read. Do love a good unreliable narrator.