Sex, Fear, and Dust - Luca Veste's Off The Record 2 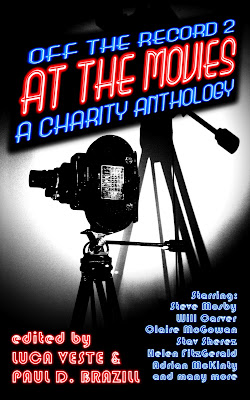 Very pleased to say that my story Everything You Always Wanted To Know About Sex (But Were Afraid To Ask) will be appearing in the second Off The Record charity anthology, directed by Luca Veste and produced by Paul D. Brazill.

The first Off The Record had a neat concept: a bunch of great writers wrote stories all named after classic song titles (I reviewed it here). As you might gather from the rather spiffing cover art, and from the title of my contribution, the stories in the second volumes are all named after films...

The full list of authors can be found on Luca's site, but I will just say here that although I've never heard of Will Carver before, his story title alone has convinced me he is either a genius or madman.

Somehow, despite all the clear evidence, when Luca first sent me an invite to contribute to OTR2 I completely missed the fact it was stories named after film titles this time. I managed to convince myself it was songs again. I was merrily writing a story named after Mazzy Star's song Into Dust before I realised.

There then followed language that would require a fifteen certificate at minimum.

However, and somewhat implausibly, I then realised that the title Everything You Always Wanted To Know About Sex (But Were Afraid To Ask) fitted the story I was writing equally well as Into Dust. So I carried on my merry way, and am quite pleased with the result (which is unusual, for me) and feeling very smug it has found a home alongside stories from such talented writers.

If you want to know what kind of story could possibly fit both titles, you will need to buy Off The Record 2 when it is released. Suffice to say it's a story about sex. And death. And dust.

See you at the movies.
Posted by James Everington at 17:12

I did exactly the same thing. Was merrily writing something based on the Afghan Whigs 'Honky's Ladder' when Luca spoilt it for me...