Review: The Faceless by Simon Bestwick

Having dabbled with a few of his short stories, The Faceless is the first complete Simon Bestwick book I’ve read. And, like the whisky I'm drinking while writing this, it sure hits hard.

The book seems to me to be divided into three acts, and it’s almost impossible to guess how it will end from its measured, creepy start. It initially reads like Ramsey Campbell transplanted from Merseyside streets to small town Lancashire. In this 'act' the three principle characters are introduced, as well as the setting: the town of Kempworth, which is subject to a spate of disappearing and sightings of the mysterious ‘Spindley Men’. 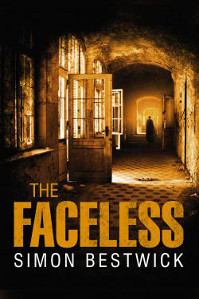 The second 'act' tells of a police raid on the abandoned psychiatric hospital Ash Fell and it ups the action and the tension; and the third... well, that would be telling. Suffice to say, the scope of the tale has expanded dramatically. This three act structure allows Bestwick to show off his adept handling of differing styles of horror – from the creeping paranoia at the start, to the full-blown, panoramic terror of the final scenes.

The modern-day setting dovetails with a story of the past come back to haunt us – specifically WW1. One of the book’s real triumphs is the way it shows how the effects of this conflict lingered long after 1918, particularly for those areas of Britain where the local men had all been recruited into ‘Pals battalions' - men conscripted from the same area, with the promise they'd be able to fight alongside their neighbours. The idea was to increase moral, but where a Pals Battalion suffered heavy losses it could result in local communities where almost an entire generation of their men-folk were wiped out or injured in a single battle… But Bestwick doesn’t idealise WW1 soldiers as others might; while recognising the enormity of their sacrifice he recognises, also, that the Pals of WW1 were no saints by today’s standards, and were motivated by bloodlust and jingoism as much as protecting our freedoms... And The Faceless also dares imagine that, looking at our liberal land today, those soldiers might feel their sacrifice was not worth it…

This review only scratches the surface; there’s a lot going on here. Suffice to say this is a belter of a novel, aware of the genre’s traditions but original and unique. The local detail and dialogue of the “bastard North” is done well without over-doing it, and the book certainly doesn't shy away depicting horrors both supernatural and realistic. It’s safe to say the ending is bravely uncompromising as well: fitting, but hardly uplifting. Looks like Bestwick is one to watch...
Posted by James Everington at 21:37