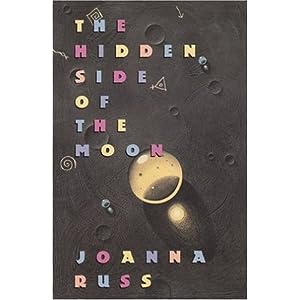 Strange Story #16: The Little Dirty Girl
Author: Joanna Russ
Collected In: The Hidden Side Of The Moon
Anthologised In: The Weird


The Little Dirty Girl by Joanna Russ is a great example of how the trappings of weird fiction can be used for effects other than generating horror. There is a sense of unease running through this story (as there is in so many stories that I like) which is generated by the reader’s uncertainty about who the titular little girl is and what she means. But this unease doesn’t climb an arc into fear and outright terror, as it does in many a horror tale; instead it is a steady-state doubt, a distant but distinct thrum in the background of the story, and one that continues after its ‘resolution’.

The little girl in question starts appearing in the life of a prominent, childless academic, first in a supermarket, then at her home. The girl seemingly has no family, no friends, and there are hints that the girl exists only in the narrator’s story (which she is telling in a letter to unnamed friend).

'What's your name?'
'A.R.' Those are the initials on my handbag. I looked at her sharply...
'I don't believe that,' I said finally.

But the girl is seemingly too physical to be an ambiguous ghost: dirty and grubby as the title suggests, and boisterous, hungry, energetic and uninhibited. She dirties up the bath (the main character ends up caring for the little girl more and more as the story progresses) and runs around naked and full of energy and an appetite for unhealthy snacks afterwards. As I said, there’s little threatening or scary about the mysterious girl in herself, at least in the main body of the story. The worrying things are where the girl has come from; where she goes to when not with the narrator; whether she gets any maternal affection from anyone else… Is there anything supernatural about her, or is she ‘weird’ only in the sense that all children are weird to those unused to them?

This, surely, is what we mean by strange fiction – to take something normal and make its inherent strangeness obvious by context and implication?

There is a sort of denouement that hints at the supernatural, at a needy, vampire-like being:

'Tell me what you need!' I said, and A.R. raised her horrid little face to mine, a picture of venomous, uncontrolled misery, of sheer, demanding starvation.
'You,' she whispered.

(I love the control of this writing, the word-choices making you veer between pity and fear.) But there's nothing so obvious as vampirism here, nothing violent or even fully comprehensible - both the dirty little girl and the narrator end up crying and bawling and the next morning it is only the narrator who remains, for the girl has vanished.

I said "sort of denouement" because this isn't actually the end to the story either; indeed there's a sudden detour (or seeming detour, because no good short story actually deviates from its chosen path) where the narrator meets her mother for lunch. She's never had a good relationship with her mother, and a reason for this is revealed, and a tentative understanding reached. And obviously the little girl, and what she in fact represented about the narrator's own childhood, has something to do with this and again the thought - was she just a figment of the narrator's mind, a symbol of something repressed? A ghost of something that never was?

But then you remember the raw physicality of the shouting, precocious, little dirty girl, and begin to doubt your doubts...

Next Time: Strange Stories #17: THYXXOLQU by Mark Samuels
Posted by James Everington at 20:01