Regular readers of this blog will know the name Iain Rowan, and also that I rate him as one of the best new authors I've discovered in recent years. Excitingly his début novel One Of Us has just been released by Infinity Plus - it was Shortlisted for the Crime Writers' Association Début Dagger award.

It's available now in paperback (US | UK edition coming in early April) and as an ebook (Amazon US | UK). I recommend you all go out and buy ten copies. 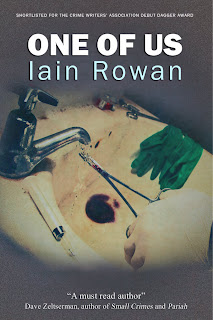 Anna is one of the invisible people. She fled her own country when the police murdered her brother and her father, and now she serves your food, cleans your table, changes your bed, and keeps the secrets of her past well hidden.When she used her medical school experience to treat a man with a gunshot wound, Anna thought it would be a way to a better life. Instead, it leads to a world of people trafficking, prostitution, murder and the biggest decision of Anna's life: how much is she prepared to give up to be one of us?

In other news, the Abominable Gentlemen are readying the latest issue of Penny Dreadnought for its entry into the world; it is to be called Uncommitted Crimes, after this quote from Theodor Adorno: Every work of art is an uncommitted crime.

Posted by James Everington at 19:39

I think Chris is excited too...