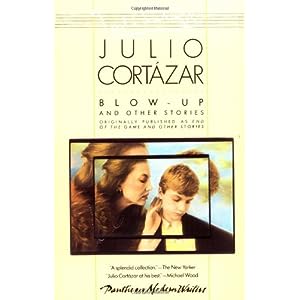 Strange Story #2: House Taken Over
Author: Julio Cortazar
Collected In: Blow Up And Other Stories
Anthologised In: Black Water

...it happened so simply and without fuss

I first read this story in the superb anthology Black Water (ed. Alberto Manguel) which is tragically out of print. House Taken Over is the first story in the book and it is a great opener. One of those short stories that, upon finishing, you immediately turn back to the first page and re-read. And it is very short too, a compressed little marvel of story telling and omission.

The plot is deceptively simple, and as such I can't really talk about it without *Spoilers*. You have been warned. Anyway, the narrator and his sister Irene live in a large house in Latin America; they don't work - the house belongs to their family and one imagines they live on inherited wealth. They live a simple, some would say boring existence, and they both seem to have retreated somewhat from the outside world after vague failures in their personal lives. The first part of the story gives some details of the layout of the house and of the pair's mundane existence. Then the narrator hears some noises from one part of the house:

This deceptively simple and low-key response is typical of the story as a whole. Who or what "they" are is never explained, nor how they can take over parts of the house. Why the siblings are so unsurprised is not clear, nor why their reaction simply involves accepting it and living in smaller and smaller parts of their house. Their only regret appears to be that when a section of the house is taken over, they cannot enter it to retrieve any belongings they may have left there. Eventually, the brother and sister are forced out of their house completely, after the narrator hears "them" on their own side. He locks the door and tosses the key down a drain, not wanting anyone else to inadvertently enter the house while is is "taken over".

What this all means is never clear; there have been many attempts to interpret the story in light of Cortazar's left-ist political beliefs, but while interesting none of these interpretations can be definitive when the central story is so ambiguous. It's true that the brother and sister's passivity, and their acquiescence to their house being taken over does seem to imply some of the fault is theirs, although it's never explicitly stated. And did they ever deserve or need such a big house anyway?

Irene and I got used to staying in that house ourselves, which was crazy.

Or are they in fact crazy? For there are psychological interpretations of this all, alongside political ones. But this multitude of possible meaning doesn't make the story less ambiguous, but more so. At the end of the day, it's a cracking ghost story, also.

This story made a big impact on me at the time, and encouraged me to buy the collection from which it came,   Blow Up And Other Stories, which contains many more great stories, both strange and realistic. This is the one that has always stayed with me though, and whenever I'm woken by a strange noise in my home in the middle of the night it's always in the back of my mind - maybe "they" are taking over my house too.

Next Week: Strange Stories #3. Where Are You Going, Where Have You Been? by Joyce Carol Oates
Posted by James Everington at 18:00

I hadn't read this one before you posted about it, but now I have I know that if I had chanced upon it a couple of weeks ago I'd have thought: James would like this.

House Taken Over seems to exemplify some of the things you've been talking about recently - the unsettling power of ambiguity and the not-known. Completely agree, and I can't think of any scenario in which the goings-on are explained which wouldn't make it a weaker, more ordinary story.