I've just finished a new story called The Time Of Their Lives. I started this one on the 28th June 2010. It's almost exactly nine thousand words long.

Oh no, some of you might be thinking, at that pace I'm going to have to wait years for the sequel to The Other Room! (I hope at least some of you are thinking something along those lines anyway...)

But I haven't actually been working on a solitary 9k story for nearly 18 months. I tend to have multiple stories on the go simultaneously, all at different stages of completion. Most I write in three drafts:

1. Handwritten draft where everything is a frantic, illegible scribble, with lots of crossings out, notes to myself, and misspellings. Character's names may often change mid-story at this point, and I'll get really basic things wrong in the rush like there/their/they're. My first drafts look something like this: 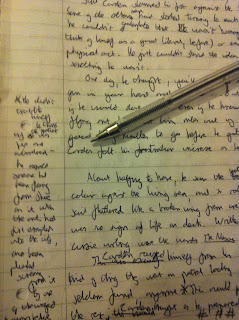 2. Second handwritten draft. Here I'll try and sort any basic structural plot problems, and rearrange, add or delete whole scenes or characters. I think there's something to be said for handwriting stories, even in this electronic age. There's an old adage for writers which says "kill your darlings". Don't let your oh so pretty sentences survive just because they are pretty. And for me that's a lot easier to do when early drafts are handwritten because it guarantees I'll have to physical write/type each and every sentence (and every word in every sentence) multiple times. Which helps me spot opportunities to quash something pretty.

3. Word processor draft. This can be quite quick, or another painful flailing around if the language of the story is still all wrong. I like to have fixed anything structural before I get to this stage though.

So at any given point I'll have multiple stories at various different stages in the above sequence, and I like to take a break from a story between drafts, and work on a different one. So now The Time Of Their Lives is finished, I might go back to a story called The Man In Blue Boots (at draft 2.) or one with the working title(s) Flies, Eggs, or No Insects At Sea (at draft 1. - titles are definitely things I don't have sorted until 2. at the earliest. I hate titles).

God knows if any other writers do anything remotely similar.

This year though I want to get some stories written from start to finish in a lot quicker manner, to mess with my approach a bit. Maybe I've become too comfortable in my routine, like a man who always has sausages on a Tuesday. I want to write some stories for markets with a set theme, with a set word count, to a set deadline. I think this will be good for my sense of writing discipline. Penny Dreadnought will help with this some, as will some other projects I have my eye on. I may fail, but even those failures will help me learn about the contours of my talent, such as it is.

(By the way if you think 18 months was a long time for The Time Of Their Lives that's nothing - the final draft of The Shelter was completed 16 years after I first set pen to paper! I told you I might need some writing discipline...)
Posted by James Everington at 21:43

I actually read 'Flies, Eggs, or No Insects At Sea' as one title and thought it sounded very intriguing...

I often have more than one thing on the go at a time (and with 52Songs, am going to have to or I'll get nothing done), and like you that means that I can switch from one thing to another - first draft to revising to polishing. Sometimes I'm in the mood for one more than the other.

Have written a short this week (working title, and possibly final title: The Singing, which is much duller than Flies, Eggs Or No Insects At Sea) and have been pushing myself to get that all done within the week. I do like to do that, because it gives me a continuity of feel which is sometimes harder if I take longer over a short. A lot of my short stories tend to turn out shorter than yours though, I think, which makes doing that easier for me. Do you think you have a 'natural' short story length that many of yours turn out around? 2.5-5k seems to be mine.

Most drafts get done on the computer. I do like handwriting fiction, and I like the idea of handwriting fiction even more, but the reality for me often amounts to RSI and pages of story that appears to say things like 'mfhtnnem kstrtrs bnmbl'.

However, I do wholeheartedly support the notion of a weekly sausage-eating regime.

Apart from note taking, I haven't written a short story in longhand in years. For the most part I concentrate on one short story at a time. Although, as with all things, this isn't a fixed rule.

Iain - yeah a lot of my stories come out at the 8-10k mark. I wish my natural length were shorter [insert your own pun here] as they'd be easier to find markets for, but there you go.

Oh and my favourite sausage would be a toss up between Lincolnshire and Merguez.