It's like a later "Tom & Jerry" when the two of them could talk
Like the Stones since the Eighties, like the last days of Southfork.
Like "Planet of the Apes" on TV, the second side of "'Til the Band Comes in"
Like an own-brand box of cornflakes: he's going to let you down my friend.

I've teased about this before, but this is the first official mention: in September I hope to have a new book out. It's called The Shelter and I didn't want to include this story in The Other Room because I didn't think it fitted - although still horror, I think it's a more commercial, traditional horror story than those in that collection. There's a reason for why it's different to my usual stuff, which I explain in the afterword.

Or it would be more commercial, if it wasn't for the length, because The Shelter is - gulp - a novella. (In fact at approximately 15k words some writers would call it a 'novelette' but come on people! We're supposed to be writers, and yet you use such a manifestly ugly, dispiriting word as 'novelette'? For shame!)

Anyway, because of the length of this story, I don't plan to sell it for much above the minimum ebook price point in the foreseeable future, so the cover art will again be all down to little old me. Below you can see the first stab I've made at it; I would be seriously grateful for any and all feedback: 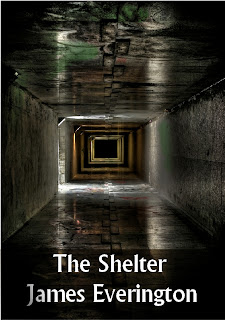 And yes I know, the Pulp lyrics at the top of this post, and indeed it's title (which is the name of the song) don't really relate to the content much do they? Or at all, to be honest, beyond the use of the word "cover".

But they are cool as sin, and sometimes that's all that matters.
Posted by James Everington at 17:44

Email ThisBlogThis!Share to TwitterShare to FacebookShare to Pinterest
Labels: needless worries, the shelter

I love love love the image, it's great. Really striking, holds up well when I zoom out to make it thumbnail size.

Do wonder though whether the text could make more impact - sorry, this isn't very helpful because I can't put my finger on why, but I would try out a few variants...there's just something about it. Maybe title in caps, or a stronger font, something to make it pop out more?

I hate the term novelette. Do we really need a new term for every 5k interval?

Thanks guys. I'll look again at font - it's just the same as I used for The Other Room, I didn't think about it.

Hadn't realised it was the same font, interesting, because The Other Room looks fine. Maybe it looks different because the title's shorter? Anyway, is only one person's opinion so I wouldn't change unless you get the same feedback from others!

And yes, agree wholeheartedly with Alan - novelette is a horrible term and sounds like it should be some kind of small moist tissue in a packet you get after a meal on an airplane.

James, I found you through the BestsellerBound newsletter -- thought I'd comment and hope you don't mind.

I'm in the camp with the others: the image is great, dark and intriguing. Your title and author name lack the corresponding power.

I can send you an example of what I mean by email if you like.

Hi Jason - thanks for stopping over from BSB and thanks for the opinion. As both you and Iain gave mentioned text being weak I'll have a rethink. Email is jameseverington at hotmail dot com

Cover image works for me.

I didn't see a problem with the text -- the white lettering on the dark background stood out nicely, I thought. But then everything I know about design and typography could be chiseled in large block letters on an electron, so...

Will watch for the story in Sept.

Cover is great, James. Just published my own novella, Specter of The Covington Fencibles. I pried open the wallet to pay for a nice cover. At 99 cents. Gotta sell a lot just to pay for that!