When I started posting on websites and forums relating to writing, on a whim I set my avatar on most sites to this image:

For the last couple of years I've been waiting for someone to ask me what it is, or why I've used it, but none of you bastards have. But sod you, I'm going to explain anyway.

Some of you may know it's a close up of a 1615 painting by Salvator Rosa called Self Portrait. I've made sporadic and lacklustre attempts throughout my life to learn more about art, and this is one of the few paintings that's ever really struck me in the same way books or poems or songs do. Typically for me, it's not just the visual side that made an impact, but the words. 'AVT TACE AVT LOQVERE MELIORA SILENTIO.'

'Be silent, unless what you have to say is better than silence'

To me, silence is a blank page.

I think we can all admit there's too much noise in the world. And we all contribute to it: the emails, the Tweets, these godamn blog posts. Everywhere you go, everywhere you look, someone is talking, someone has written something down, usually in an attempt to sell you something. And I'm as guilty of it as the next person; more so, probably. "Buy my book, buy my book" a thousand times a week, each time in some cunning and eloquent new disguise.

But when you sit down in front of a blank piece of paper to write, that blankness is silence, that whiteness is silence. And I always think a writer should make sure that what they are about to write is better than that whiteness. That it's not just noise, that it's not just another cynical attempt to, ultimately, get money from people. That it stands with those other words that have broken the silence and have been better than it. That you're breaking the silence for love, not money.

This is a hypocritical blog posting, no doubt about it, and I deserve to be pilloried for attempting to make myself out to be all high-faluting and concerned with better things than everyone else, when really, really, all I'm saying here is "buy my book, buy my book" and wondering why the new words I'm typing feel so weary and familiar for all their newness.

But hypocrisy doesn't stop us knowing what's right and wrong, and failing to stick to our own values doesn't remove the obligation from trying again the next time. We're all trying to scrape together money; we're all selling something. And that's the world we live in and that's the world we've created, and who are we to judge?

But when you sit down to write - not sell, not promote, not market, but write - take a long look at that blank white space; take a long listen to that silence. And write something better than it. If it helps, imagine this stern gaze upon you as you do so:

Oh, and if anyone's still reading and wonders what I really look like, then here I am. Hello. 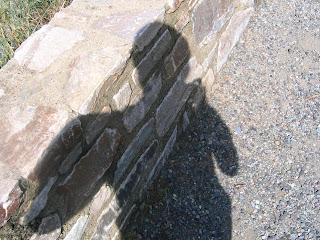 Posted by James Everington at 19:40

Ah, and I was just about to ask you about the avatar on Twitter too...

Good post. Lots of discussion at the mo about how many more, how much, how many, less so about how good.

Your avvie always makes me think of Johannes de Silentio, one of Kierkegaard's pseudonyms.

An alternative way to think of silence is like the non-vacuous vacuums of the cosmologists, for whom nothing is not an absence, but the expression of every conceivable thing - as a possibility. The moment a "something" appears, every other possibility is snuffed out. I think it's that responsibility that sometimes paralyses us as writers

Om the unstruck sound that is the potentia of all sound and creativity. The different sounds the tongue can make in order to enunciate language.

Wonderful.
But sometimes there is a long silence of the inner self that builds and builds until it explodes into noise.
There's a line in a Tori Amos song, silent all these years, that speaks volumes about that sort of need to speak/write.
I'm needing silence now, craving an escape from the need to talk without saying anything that comes from being too much with people. But the words on the page are different.
Viv

Some great replies, thanks people.

Dan - you're right, a blank piece of paper contains the potential for *every* story ever in it (how very Borges of you).

And then as soon as I write the first letter, it the infinite possibilities come crashing down to whatever mundane shite I'm writing.