I have to admit (although I didn't at the time) I was apprehensive about releasing The Other Room earlier this month, far more so than when Feed The Enemy came out. With FTE I had a lot of internal excuses I could say to myself if it didn't sell well:


"Well it's just a standalone short story, and not many people buy those"
"It's not like the normal stuff I write, so it doesn't matter if it doesn't get good reviews"
"To be honest, I never liked the cover art..."
etcetera

None of these applied to The Other Room. It's my first full collection of fiction, and with the cheap initial price, the great cover photo by Neil Schiller I used for the art work, and the lessons I learnt promoting FTE, there were no excuses any more. Not that I'm expecting instant mega sales, I know enough to think that my fiction has cult appeal at best. Which is fine, some of the writers I like best are cults [insert your own pun here, if you're that way inclined]. But even cults have to start somewhere...

Fortunately, my nerves appear to have been misplaced (I spend half my life worrying about things that never happen). The Other Room has sold pretty well, on my terms, easily doubling Feed The Enemy's monthly best already. And the first reviews have been positive, including this one on Barry Skelhorn's blog. Obviously I have a lot of work to keep doing to promote it, but now I can stop worrying about it being a total disaster, and move on to worrying about something else...

Nevertheless, Feed The Enemy continues to live a life of its own out there on the internet, and I was recently interviewed about it as part of Dan Holloway's 'How Long is a Piece of Rope?' series on his blog. The concept is, Dan asks the same, somewhat unconventional, questions to all authors taking part. Take a look, and while you're over there do check out the rest of Dan's site because a) he's a great writer, and b) it's a great site, full of interviews, bits about Oxford, recipes & puzzles relating to his book.

Finally, a shout out to some good books by other indie authors I've been reading (links are to Amazon UK):

The Poison of a Smile - Steven Jenson - interesting cross between period history and a Peter Straub style horror novel. 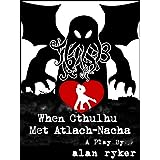 The Haiku Diary - Neil Schiller - It's that man again. I was sure I'd mentioned this on here before, but apparently I've only mentioned Oblivious. This is Neil's diary, in Haiku form. Insightful stuff huh?

The Little Girl In My Room - Clare Farrell - uneven collection of horror short stories. Some I really liked, others really needed something a bit extra. Worth the price for the good ones though.

When Cthulhu Met Atlach Nacha - Alan Ryker - what to say? A one-act play, which is a romantic comedy set around Lovecraft's Cthulhu mythos... This was always going to be awful or great. Fortunately, it's the latter. Kudos!

Flashes Of Humor, Glimpses Of Life - Alain Gomez - you know about this from the previous blog posting. If not, go read.
Posted by James Everington at 14:53

Delighted The Other Room's kicked off so well, James. I love the look of that Cthulu book.