The Other Room - Author's Notes Part 1 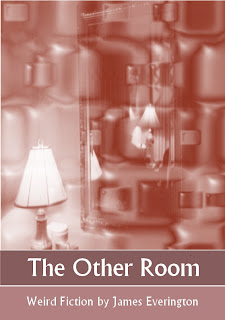 I've always loved short story collections where the author describes some of the background and inspiration behind the stories in the book. Stephen King and Neil Gaiman, for example, both do this very well - see Skeleton Crew and Smoke and Mirrors for evidence (in fact in the latter Gaiman goes one better and hides an entire extra story in the notes).

Maybe such explanations are even more interesting for surreal or supernatural fiction, where a simple autobiographical explanation isn't available from the story itself.

And maybe, also, it's only wannabe writers who read the author's notes so avidly? I don't know, but as soon as I decided to put out some stories in a self published collection, I knew I'd do some notes of my own for them.

In order to give people a taster of what The Other Room contains I'm going to start posting these notes on this blog as a sneak preview (they may need editing slightly from the versions that will appear in the actual book to avoid spoilers). I start with the title story itself...

I've the kind of job where I occasionally have to stay in hotel rooms on my own, but not often enough to get used to it. And there's something weird about the experience, a sense of anonymity to go alongside the anonymity of the cheap hotel rooms themselves - no one knows you. You could be anyone.

Returning from the hotel bar on one of these occasions, I put my hotel swipe-card in the wrong door. Although nothing happened the thought occurred to me - what if it had opened? This story pretty much wrote itself after that initial thought. I didn't plan it, and things I wrote without thinking turned out felicitously, such as the whole Waits/Straw thing. If I'd planned that before hand, I would have spent ages getting two names which were exact reversals of each other. But of course the world outside the Other Room isn't an exact opposite of our own.

I chose this as the title for this collection because reading fiction, in particularly weird or fantastical fiction is like stepping into a strange room. One where everything initially seems familiar and safe, but you still feel that something, somewhere, is off-key...

I'm sure it will surprise no one that I wrote this whilst living in Oxford; like the central character I did grow up in a Nottinghamshire mining village, although the one presented in the story is an exaggeration.

This was originally going to be a much longer piece, but in order to submit it to a magazine I had to slim it down to make it fit a lower word count. They rejected it, but fortunately Morpheus Tales accepted it - my first accepted piece of fiction.

Slimming this down made it better, I think; the whole thing now pivots around the garbled quotation from Larkin. The poem is The Explosion from High Windows.

I see this as a ghost story, for what are ghosts but the past come back for us?

Some Stories for Escapists

I wrote a ton of these while I was at university; I think I was inspired both by Labyrinths by Borges and Stephen King's description of horror archetypes in his non-fiction exploration of the genre Dance Macabre. I interlaced these archetypes with personal, subjective views of my own on horror stories...  The result was rubbish, but that's fine - every writer needs to write some rubbish before they become any good. And being at university gives you a perfect opportunity to write such rubbish, particularly if it is pretentious rubbish, which this certainly was. Fortunately I put the finished thing in a drawer and never showed anyone.

About ten years later I mined and revised the best bits from the bloated original when I first saw the phrase 'flash fiction' on some trendy new website.

Email ThisBlogThis!Share to TwitterShare to FacebookShare to Pinterest
Labels: author notes, The Other Room

So glad to see someone else who enjoys these author notes as much as I do, James! Great idea in using notes about your own stories to give us a teaser of your book. Sounds intriguing so far.

James, I can't wait to read these now. I have a bizzare relationship with hotel rooms too. When is it out?

Thanks for both your comments... glad someone is reading these notes at least!

Neil - just needs the odd nip and tuck and then will be done. Current plan is to get it ready in next week and then go for it a week on Monday - I've a stag do to attend between now and then so want to put it out after than so I can give it some proper attention!

I think you're going to like the hotel room story then...!